What the Forest Can Teach Us 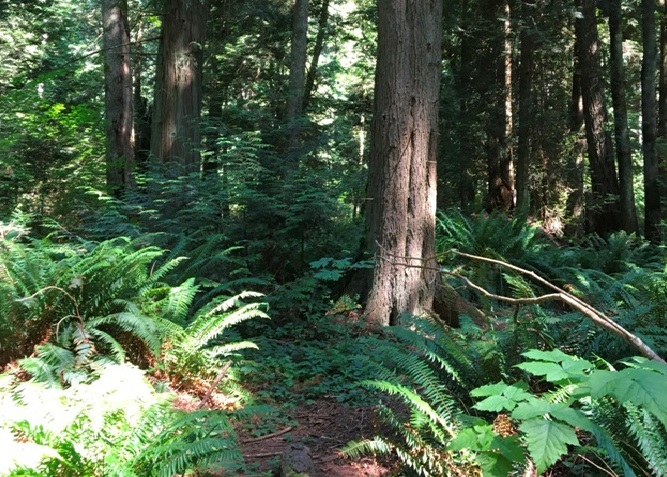 The Fraser’s forest, within the range of the coastal rainfall, is a spectacle of energy and power as appalling as the river itself.  Mindless it moves with sure purpose.  Voiceless, it murmurs perpetually with the sound of shredded wind in the treetops and the hum of insects in the underbrush.  Sightless, it discovers every open space, every cranny between the rocks where it can anchor its roots.  Helpless before man’s machines, it surges again the day after he has passed.

So it will always surge – dark at noonday, dank in the rain of winter, dry and crackling in the summer drought, panting under the smoke of autumn fire, forever whispering around you its dismal secrets.                        – Bruce Hutchison, 1950

Hutchison, at least in part, was coming from a society and a time that placed significance on human progress.  If we listen beyond such ideas, we discover that the forest is indeed not voiceless, as Hutchison claims, but instead contains uncountable voices. Often powerful voices. At times overwhelming voices.  Something akin to the voices might emerge from the Gaia talked about by Stengers and Latour; voices emerging from earthly powers far beyond the influence of all human tinkering and dreams of control, and far beyond what Bateson referred to as conscious purpose. If we listen, perhaps we will hear this forest speak of powers, of influences, and of things far more alive than what Hutchison called, dismal secrets. In relation to the very forests of the Fraser River watershed, we might enter a conversation around possible worlds that come into being through our engagements with these arboreal realms.  Our connections with these forests, can open new and unforeseen assemblages of life — and potentials for life – for those who dare to linger and listen.

First, allow me to describe the rhizome:

This image connects us to realms that are tied to the communal.

Deleuze and Guattari extolled the humble grass as the ultimate image of the rhizome — an image of life growing between things.

A woman forester named Suzanne Simard clearly articulates a subtle, vital thought that relates to the rhizome description. Simard presents a nuanced picture of the relations that enable a tree to be able to live in a forest and her emphasis was on the forests of British Columbia. In 2011 a video of Simard was uploaded to YouTube.

In that short film, Simard suggests that the trees of the forest are themselves dependent upon the numerous webs of fungal lines that move through the forest soils.  She puts forward a forest that is invested with endless rhizome connections – the fungi in the forest floor perform these rhizome functions.  The trees are not at all standing alone, every one of them is interconnected with the other trees, and with the other plants of the forest, and theses connections are made through vast underground fungal channels.

She talks about how the largest of trees within the forest, through these lines of fungi, pass on to the other trees and to the other lives of the forest, various nutrients, such as carbon and nitrogen.  She calls these larger trees, “mother trees,” thereby providing a concept that displaces common, modern ideas about authority and leadership.  She moves from leaders to mother trees, from hierarchical instruction and higher inspiration, to the passing on of nutrients within underground webs of relationship.  This is similar to thinking I have encountered within indigenous communities about elders — they must be honoured and attended to, not because of some authority they may intrinsically hold, but because they are indeed the carriers of the knowledges that are required for living with the land.  The elders and the mother trees both, within their own ecological soils, pass on nutrients into the continuing communal/rhizome life.

Simard re-contextualizes the life of a tree, and the tree of life – for the tree no longer stands alone and separate; it no longer offers itself primarily as an object of hierarchy, institution and leadership; rather it sits resolutely within the complexities of rhizome worlds.  The important warning inherent in the image of the tree, with Simard’s vision of the forest, is not so much the relations to power and authority that the image can connote. Rather, in Simard’s forest vision, the single tree, standing on its own, finds itself removed from its life-giving relations, from its ecological settings, and becomes vulnerable and endangered.  Therefore, I propose that the opposite of rhizome, in accordance with Simard’s perspective, does not have to be the tree, as an image of unilateral authority.  Rather, the opposite of the rhizome could be seen as the isolated organism, removed from its webs of life and nourishment.  The opposite of rhizome is an image of an approaching death that comes through aloneness and separation.

We are, therefore, no longer talking about a tree of life, instead we are talking about a forest of life; that is, a rhizome forest, an ecology inclusive of countless trees, the innumerable connecting lines of fungi, and all the other living relations attached within this arboreal realm.  A kind of complex underworld, called into language by Canadian curriculum scholar and poet, Shirley Turner (2018):

Opening
to another environment
a subterranean fungal ecosystem
cultivation in a different tone
a new melody
dancing seeds to life
where the rainforest rules.

And a rhizome – though discussed in other words — from Rilke.  He presents a divinity composed of something akin to rhizome relations.

When I lean over the chasm of myself –

my God is dark

This is the ferment I grow out of.

Another woman appears on the scene.  Her name is Diana Beresford-Kroeger (2010).  Like Simard, she is a forester.  Born in Ireland, an orphan, raised by foster parents who called her “the last child of our ancient Gaelic world.” These caregivers passed on to her the necessary relations that enabled her to understand the intricacies of the forest as well as to appreciate the living contexts of the people and other creatures she met and with whom she engaged with.

They taught me the ancient culture of their dying race amid the crowing of cocks and the clucking of laying hens.  They taught me the cures and the survival tactics I would need for the future.  They spoke of the Brehon Laws laid down by my own ancestors.  They taught me the meaning of life and of love, a love that comes from the heart and encompasses nature with a passion.  They told me about tears.  They gave me their strength, their woolen hugs filled with the smells of milk and cream and honey. (2010)

Beresford-Kroeger now lives in Canada and is well-respected as a scholar of forests.

The forests of British Columbia, according to Beresford-Kroeger — that lie within the Fraser watershed — are part of a global system of forests surrounding the Northern part of the planet.  This crown of trees around the North of the planet is called the Boreal Forest, named after the Greek god, Boreas, the “legendary god of the north wind…”  Beresford-Kroeger states that “These forests are seated upon the planet like a monk’s tonsure, trimmed, tight, and fully circumpolar.”

Beresford-Kroeger discusses the tremendous earthly powers of the Boreal, claiming:

These forests are therefore equipped with powers far beyond human abilities to truly comprehend, let alone for humans to adequately intervene.  Not only is life created and supported through the rhizome fungal lines, as revealed by Simard the forest-rhizome actively holds together diversities of worldly life through extensive global movements of air and water that the Boreal forests initiate.  The Northern forests are vast webs of worldly generosity.

Beresford-Kroeger, a person who holds firmly to the usefulness of scientific understanding, discovers a spirituality inherent in the movements of forest relations:

The forest is the environment that drives and fulfills the dream of each leaf in a vast rhythmic cycle called life.  Nothing is outside.  We are all of it in a unity that transcends the whole.  Maybe, just maybe, this resonates of God.  If that is so, then we are all His children, every earthworm, every virus, mammal, fish and whale, every fern, every tree, every man, woman, and child.  One equal to another.  Again and again.

As we move through these great forests along the Fraser River watershed, new worlds open before us that suggest that the wellness, the possibilities, the learnings, the healings that we are searching for are already present, moving in diverse rhizome realms, in the forests, other ecosystems, and the varied webs of human relations to which we are all connected.  For none of us stand alone like the tree presented by Deleuze and Guattari.  No, rather we are like the grass, and Simard’s interspecies fungi-forest relations, for we are all in the middle of living, in the middle of relationships, and we are all embedded in abundant rhizome worlds.  Also, following Beresford-Kroeger, these webs of relations, these complex worlds that we find ourselves within, are capable of bringing health and healing, beauty and possibilities, to relations far beyond ourselves, far beyond the limits of our own bodies, minds, and histories.  Somehow, together we connect across the forests, and, through the flows of winds, streams and rivers, pass on health and wisdom to ecological relations far beyond anything we can now foresee; and relations far beyond our own vision and knowledges.  And, in turn, we receive health and wisdom from other ecological contexts, from locations that may be distant from our present realms; from faraway and unknown places.  Sets of relation that come along and touch our contemporary living relations, and, consequently, also our undisclosed futures.

These forests, therefore, propose for us a joint future – not a planned and executed world, but a future which we, at this point in time, cannot see or imagine.  And, isn’t that what a future is?  If we knew in advance what the future would hold, it would be a present or a past, not a future.  In the words of Elizabeth Grosz, “The task is not so much to plan for the future, organize our resources toward it, to envision it before it comes about, for this reduces the future to the present.”(2004) Perhaps, therefore, it is within these forests, these vast webs of relations, that we can discover, encounter, and become part of a future that is yet to come.

3.Bruno Latour, in — “Waiting for Gaia. Composing the Common World through Arts and Politics.” Equilibri (16, no. 3, 2012; Bruno Latour. “Why Gaia is Not a God of Totality.” Theory, Culture & Society 34, no. 2-3. 2017. 61-81; along with Isabelle Stengers — “Gaia, the Urgency to Think (and Feel).” Palestra no olóquiOs mil nomes de gaia: do Antropoceno à Idade da Terra. Fundação Casa de Rui Barbosa (2014). http://arena-attachments.s3.amazonaws.com/318801/1b425e9ead662cac506077f9fd998318.pdf, present a unique take on the concept of Gaia.  They suggest that the earth is not so much a mother earth, with inclinations to look after us, but rather she is the goddess, Gaia, who represents the powers of earth and the heavens, those powers that, if we don’t learn to live with them, will turn against us and destroy us.  Gaia, according to Latour and Stengers, is the set of forces connected with a living earth that has no respect for our all-too-human confidence and belief in our own influences.