The Collective Spirit behind an Urban Forest 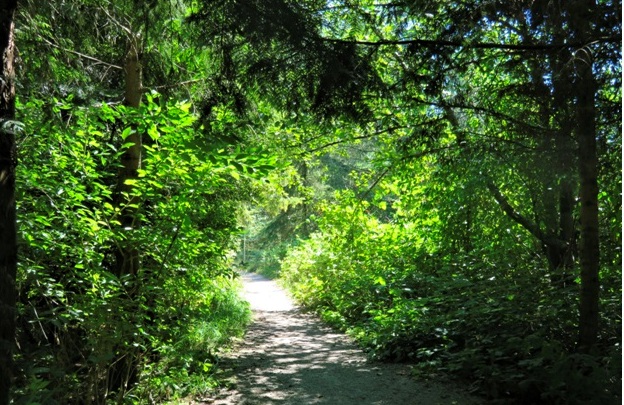 Vancouver’s Everett Crowley Park was once a massive garbage dump. It has since evolved into a unique park dearly loved by members of the surrounding community who care for it throughout the year. People like 22 year old student Damian Assadi and 75 year old David Hiebert who both live in the Champlain Heights neighbourhood next to the Park.

When I look at the park it really is a success story in terms of the community banding together to help advocate for ecological restoration and reforestation of the park. That’s what is really special about it,” says Assadi who this summer became chair of the Everett Crowley Park Committee (ECPC), a sub-committee of the Champlain Heights Community Association.

Members of Everett Crowley Park Committee in vests along with event volunteers. Damian Assadi is standing at extreme left. David Hiebert is in the centre of back row wearing a ball cap.

That passion for the park is shared by Hiebert who after retiring from his small business served as the ECPC chair for a few years.

“I got involved when I started to know the history of the area. First Nations people lived, hunted and fished on the river here.”

The river Hiebert speaks of is the Fraser.  The Park overlooks the Fraser River and Marine Drive South in southeast Vancouver. At nearly 40 hectares, it is the fifth largest park in the city.

Narrow trails cut through thick bush and forest while wider pathways allow walkers to reach an inviting meadow, a Mason Bee Home and a quiet pond. Steam vents show that garbage underground is still decomposing. This is a park in recovery.

Until settlers arrived about 1860, the park area was home to a Musqueam community. It was a heavily-wooded forest of cedar and hemlock, and contained a ravine with a salmon-bearing stream. That would change dramatically in later years as the forest was logged, farms set up, followed by industrial and residential development.

“The area was denuded of trees by the colonialists and turned into a garbage dump,” notes Hiebert.

By 1944 the site was officially designated by the city as the ‘Kerr Road Dump.’ According to the Park Board, there were few waste restrictions and unlike modern landfills, there was no regular covering of exposed surfaces with a soil cover during the first ten years of operation. An estimated four million cubic metres of garbage would be deposited there. The dump would serve the city for over 20 years before being shut down. By then, the landfill had spread to most of the property. The fill was up to 49 metres deep in places.  A layer of dirt fill averaging 1.5 metres was placed on top of mountains of garbage. As well, a gravel quarry operating in a corner of the land had unsettled most of the site’s remaining vegetation.

After the landfill’s closure in 1966, the site was allowed to grow back naturally but it was in bad shape. For the next 20 years many ideas for the property were proposed including a golf course, a picnic park, a pioneer farm and a miniature railway. Dirt bikers and motorcyclists used it as an off-road park. Hang gliders even created a hang gliding hill with the help of 2,000 truckloads of clean fill.

All the while local residents lobbied for a nature park. Eventually, as a direct result of the community’s efforts, the Park Board in 1987 designated the grounds as a park. It was named after Everett Crowley, a former Park Board Commissioner.

But what kind of park would it be?

In a 2005 management plan, the Park Board stated that “the park’s naturally regenerating landscape remains relatively undeveloped. Its primary community steward, The Everett Crowley Park Committee has proposed that the park be managed as an urban wilderness.”

The report went on to say, “It seems that the park is at once a jewel in the rough and that the rough itself is the jewel.  Care should be taken not to polish the roughness of this park.”

Today, David Hiebert wants to see the park restored to a much earlier time in history before colonial settlement.

“It’s called an urban forest. We want to reclaim it to its original. We’re working to get it back to that because we know how important it is to the community’s health.”

It’s a daunting task but core members of the ECPC are not deterred.

“As an ecological area it’s really amazing to see how it has recovered into a deciduous forest on its own and the work that’s needed to tackle the invasive species that are very much prevalent in this reclaimed landfill. A lot of stewardship needs to be done and in managing priorities because we have a limited number of volunteers, and the Park Board has limited funds and people,” adds Damian Assadi.

There are about ten active core members on the ECPC but the number of volunteers swells to about 200 as many from the community and other organizations pitch in to plant and clean up the park at various events over the course of a year.

A few years ago, the partnership between the Park Board and members of the community was solidified with a joint agreement laying out how the two parties work together. Each is responsible for certain areas – the Park Board for planting of trees as well as the supply of shrubs and plants for the community to plant. But it’s the community that does much of the heavy lifting.

A significant ongoing challenge for the community volunteers has been the presence of invasive species such as the Himalayan Blackberry which have grown aggressively across the park space since the landfill was closed.

It reminds Damian Assadi of his childhood when he loved harvesting Salmonberries from a small park in his Champlain Heights neighbourhood.

“One day I noticed a strange plant sprouting at the bottom of the Salmonberry bush. Later on, I found out it was an Himalayan Blackberry, a very invasive plant. Ten years later I came back and there was no Salmonberry bush because the invasive species had taken over the area.”

For Assadi, it was symbolic of the environmental destruction that invasive species can do and influenced his decision to enroll in a natural conservation and forestry program at the University of British Columbia.

“I really wanted to care for the land I was living on as a child. Once I realized that ecological restoration was a field…there was actually a reason I went back into my degree program.  Eco-restoration is what I want to do as a career.”

Assadi is already caring for the environment in a tangible way.  Apart from his service with the Everett Crowley Park committee, he is a volunteer with both the Stanley Park Ecology Society and the Invasive Species Council of British Columbia.  In 2020, the Council presented him with a leadership award.

The leadership of Assadi, Hiebert and other members of the ECPC is ever more important with projections showing a Vancouver of the future getting hotter and drier.

“Planting native species and stewarding to ensure that invasives stay down in planted areas is really important in the face of climate change.  It’s just not trees but the entire ecosystem. That’s why having smart management of an urban forest is important,” Assadi says.

A major priority for the committee is the restoration of the ecologically-sensitive Avalon Pond area. More study is required in order to determine what needs to be done. Assadi hopes to get universities and other organizations to assist in the collection of data.

There seems to be no shortage of projects and ideas for projects for the park.

“We like to say Everett Crowley Park is a 100 acre park with a 500 year restoration plan,” adds Assadi.