My time as a Rebel 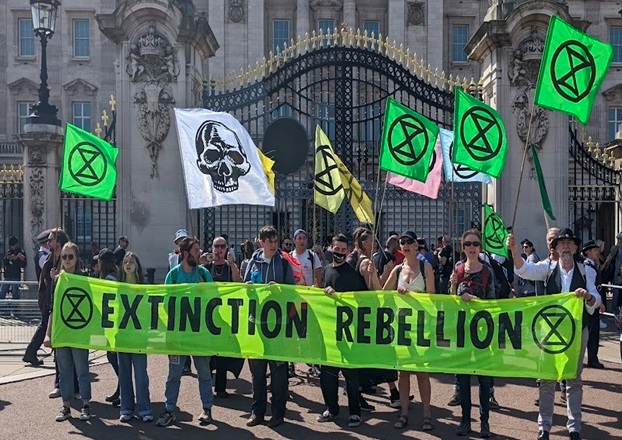 Since the early seventies I had been an ecological and political activist. In 2000 I was Interim Leader of the Green Party of BC. So, I was aware and concerned. But the real heartbreak came at a December 2018 free appetizers and wine Academic Conference on the eve of COP 24.

The Inter-Governmental Panel on Climate Change had released a dire warning: we must stop putting carbon into the atmosphere and start taking it out. To fail to do so would lead to the destruction of the biosphere and a very bleak future for our children and grandchildren. This is when it all moved from my head to my heart.

Reading the IPCC Report, I became very depressed. I had trouble sleeping. I became obsessed and studied the science to confirm its accuracy. This further depressed me. I ended up in bed for weeks fighting intrusive thoughts about the horror of climate change. This traumatic experience can still be triggered each time I read about or experience a climate event somewhere in the world.

Because I am a social scientist, I researched what helps people cope with eco-anxiety. My simple conclusion? There are three basic psychological orientations: ignorance and denial, resistance and/or acceptance.  Although denial and acceptance are necessary and useful, such orientations will not solve the climate problem and will lead to catastrophic results in the real world.

The data indicated that more and more people were experiencing eco-anxiety and traditional methods of treatment were not working.   The general conclusion was that being with supportive people who were not in denial about the crisis was essential to mental stability.  Treatment appeared to be more successful than having simple unrealistic hope that individual action was sufficient. Individual action, while necessary, was labeled, by some, as “hopium” if it does not include system change.

Informed by this data, I attempted to mend my heart by helping others while helping myself.  I hosted an eco-anxiety self-help group for six months. I also resolved to take concrete direct action. I realized that our politicians had abandoned us and that my past political efforts effectuated very little real change. I had petitioned, campaigned, written letters, run for office, supported Green Peace and other community organizations.  None of these efforts had real impact on reducing carbon in the atmosphere.

When I asked myself what worked, I remembered successful social movements of the past. The non-violent direct-action tactics of the peace movement, the I.W.W., Martin Luther King, Nelson Mandela, Gandhi, the Suffragettes, the Gay Rights and Women’s movements. I came to see that most people are bystanders to history in the making who prefer to talk about the need for change rather than actually doing something about it. I remembered the simple formula: (talk – action) = zero.  I decided I would not be a bystander and began to identify key characteristics of successful change efforts.

What I found was that mobilizing 3.5% percent of the population in sustained protests (Wentworth), around achievable goals. coupled with non-violent direct actions such as marches, occupations, strikes, were necessary ingredients of successful change.  I discovered Extinction Rebellion had a plan and a model of change based on these historically successful tactics. The key was to mobilize, encourage and support the percentage of the population prepared to stand up and act in non-violent protest, resistance and disruption and for small numbers of people to be prepared go to jail (or be the victims of the violence of others).

I came to believe that Extinction Rebellion was the best change vehicle available. Subsequently, I was a founding member of Extinction Rebellion Vancouver and have since been involved in support capacities at over 80 Extinction Rebellion and allied actions. I provided support to Fridays for the Future, anti-TMX, Land Back, Black Life Matters, and Wet’suwet’en actions over the last 4 plus years. Thus, action became my treatment for eco-anxiety and treatment became action.

Rebelling improved my mental outlook and brought moments of joy and hope back into my life. My first individual action was to display a sign while riding on public transport that read: Climate Change is real. Act Now! I was disappointed how few fellow passengers appeared to notice the sign.  Later, I found photographic and video archiving acts of courage particularly rewarding.

COVID inhibited my work with XR Vancouver and lessened the emotional relief that involvement in actions brought me.  I used the COVID isolation time to follow the movement, in the UK, Australia and NYC.  I was particularly impressed by the work of XR UK and in January 2022, I decided to develop a 3 month volunteer placement with XR London.  I justified the carbon weight of the air flight by considering my XR work a carbon off set.

In February 2022,  I completed 30 hours of online basic XR training and was nominally placed in affinity group called XR Lambeth. XR Lambeth is centered in Brixton on the south bank of the Thames.  The Lambeth group had about 30 core members and several of these members were associated with other affinity groups such as the XR drummers and the “Oil Slickers.”  We normally met once a week in a General Meeting.  In addition to UK born white and black members, we had additional members originally from, EU countries, the Americas, the Caribbean and South Asian communities.  It was a very international and multi-cultural group.

My main involvements included: group planning and coordination meetings, community outreach at local events, Drum Practice outreach, reestablishment of a Facebook Page, general support at rallies and other actions.  I took a leadership role in photography and video archiving of actions.  I assisted with about 40 actions: the London based Spring 2022 Rebellion which was10 days of action to End Fossil Fuels, five actions focusing on Shell HQ and it’s AGM, a Unity March focusing on racial Unity in face of the climate crisis, two actions focusing on Investment and Insurance Companies, 3 drumming practice outreach sessions, 13 community and social and planning events.  I made several public speeches offering greetings and support from Vancouver Rebels on Westminster Bridge and at the Tate Modern Museum.

When speaking, I introduced myself as a settler from unceded Qayqayt territory (New Westminster my birth place).  I spoke of the fundamental need to resolve issues of colonization and related land and resource extraction issues.

Actions occurred in all parts of London and my group joked that as a tourist I was getting a unique tour of the sites! I responded that was indeed true and that “been, there, done, that, got the t-shirt.”

My preferred role in these events was photography/video recording and archiving. I told my group that they were my audience and I wanted to record their acts of courage. I wanted to reflect them back to themselves and to the movement. I wanted to record their bravery and creativity so that the future would know that at least we tried. I have published some of my musical video work on Facebook and You Tube Music. Search, Tom Hetherington XRL Sounds of Rebellion.

The Campaign to End Fossil Fuel

The focus of the 2022 Spring Rebellion was to End Fossil Fuels.  To that end, we mobilized 10,000 people in a series of actions including the occupation of 10 oil plants, refineries and gasoline distribution systems. We repeatedly, occupied major squares, round-a-bouts and bridges in central London.  We marched to Number 10, Parliament and seized Westminster Bridge other bridges multiple times.

We marched past Buckingham Palace and Canada House. We sang, drummed, chanted, occupied, glued, locked, painted, swarmed, read, talked and some got arrested.  We encouraged an Executive from Shell to “Jump Ship” and join us.  The next day, Shell Corporate Office Consult, Caroline Dennett publicly joined our cause.

We infiltrated the Shell AGM and 83 XR Rebels disrupted the meeting for more than 3 hours by singing, making speeches and chanting.  Two of the songs were “Amazing Grace” sung by XR Christians and “We will stop you.”  Outside a small crowd meditated, prayed and chanted.  The event was visited by five black robed and face painted “Oil Slickers” who moved silently through the crowd and preformed choreographed body sculptures.

XR London also occupied the Lloyd’s of London Building demanding that they stop insuring and investing in fossil fuels.  The Lloyd’s building was “shut” and business halted for a day. The Canadian Government owned, Trans Mountain Pipeline (TMX) was specifically cited as a risky project that should be de-insured.  Two days later, two companies refused to insure TMX citing our protest as a contributing factor to their decision.

Was it worth it?

Being impacted by eco-anxiety and engaging in “action therapy” has helped me to cope with my existential fears and depression.  In this way, it was worth it. It is still very difficult to know the science and what lies ahead and deal with the people oblivious to the emergency.  It is like seeing a terminally ill loved one exhibiting the checklist of symptoms and refusing treatment because it would mean change.  I frequently rage at educated people who say they are aware of the problem and still do nothing. I am not a fun guy to invite to a party.

Sadly, in the four plus years that I have been in rebellion the amount of carbon and methane in the atmosphere has surpassed several tipping points and it is becoming increasingly obvious that climate change is happening now. And yet, we still fail to act. I have not been able to move friends to taking concrete action. So, by those measures my work has been a failure and a waste of time.

Conversely, the friendship and comradeship I experienced by acting with other people who also see the problem provided hope and inspiration.  Without hope life has little meaning.

Personally, my activism has given me look into the eyes of my grandchildren and say “when there was time we stood up, I refused to be bystanders, I resisted, I tried.”  My only fear is I did not try hard enough to make a real difference.

One day some careless campers left a camp fire smoldering in the forest. A strong wind came up and started to blew sparks onto dry grass.  All in all, a risky situation.  A hummingbird struggling back against the wind to its nest saw the flames and immediately started to fly back and forth between a puddle and the fire.  Filling its tiny beak with water and then expelling it on the flames. Getting more exhausted with each trip.  The other animals stood by and watched the hummingbird fly back and forth. “What are you doing? You are too small to make a difference,” they said.  The bird paused in mid-flight, and replied “ I am doing what I can to put out the fire.”