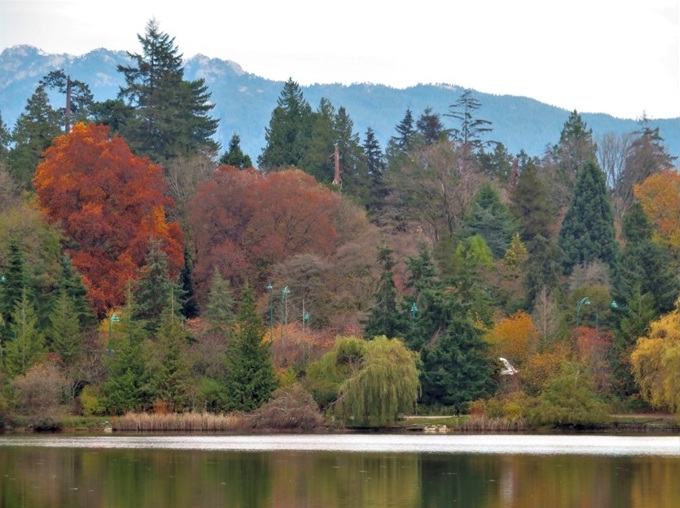 August 2022 was one of the hottest, driest months ever in Vancouver and those conditions

are expected to worsen in the future. Regional climate models project an average increase of about three degrees Celsius by 2050 with the amount of rain expected to decrease by 20 percent.

Whether one lives in Metro Vancouver, Kelowna or another large municipality, cities

around the world are bracing for extreme weather caused by changes in climate. As buildings and paved surfaces are allowed to cover more urban space, greater absorption of heat occurs. Scientists are now documenting the impact of so-called urban heat islands – an effect where cities are much hotter than surrounding outside areas. In the case of Vancouver, a growing population of a million more by 2050 will further fuel the warming trend.

So what can cities do to make their living environment more resilient and adaptable to the climate crisis?

One major initiative being adopted by municipalities and more senior governments is the preservation, protection and planting of trees. Action is evolving in many ways. On a grand scale, more than 100 nations including Canada have promised to end and reverse deforestation by 2030.  Last year our Federal Government launched a program to plant two billion trees by 2030. About 29 million trees were planted in 2021.

The go-to target for many cities is the enhancement of their urban forests. The environmental benefits, alone, are numerous and far-reaching such as improving air quality, storing carbon, improving water quality and reducing soil erosion, providing an essential habitat for wildlife and moderating the local climate.

The shade of a single tree can provide much relief from the summer sun. However, when that single tree is part of a small forest, it creates a significant cooling effect. A UBC research project in conjunction with the city of Vancouver  found a difference of 8 degrees Celsius on a hot summer day between neighbourhoods with dense tree canopy and those with much less forest cover.

Vancouver’s urban forest includes native forests in iconic Stanley Park and other parks, street trees, and trees on private property. In Vancouver’s Greenest City Action Plan, the city committed to plant 150,000 trees over 10 years starting in 2010.That goal was reached in 2020 with the planting of a grove of Douglas fir trees in New Brighton Park.

In its Urban Forest Strategy, the Park Board and the city of Vancouver have set a tree canopy target of 30 percent by 2050.  Tree canopy is that part of the city shaded by trees. According to Don Morrison, the acting urban forestry supervisor for the Park Board, canopy coverage is currently around 23 percent.  To reach the city’s target goal, some major challenges exist.

Morrison says periods of drought and intense temperatures will have a direct impact on our urban forest.

The Park Board says it has increased its watering of younger trees and in some instances used water cannons to support juvenile or mature species during severe drought in parks.

Other threats to Vancouver’s urban forests include pressure from urban development, limited space above and below ground, supportive soil slowly disappearing and increased presence of certain insects and disease. An example of the latter is the Looper Moth in Stanley Park which according to Morrison targets Hemlock trees.

“Climate change has supported prolonged increases in population that can negatively affect the forest.”

What is especially striking about the data on Vancouver’s urban forest is how the canopy cover is distributed throughout the city.  64 percent of tree cover is on publicly managed lands such as parks, roads and laneways while the rest is on private property which occupies 57 percent of the city’s land base.

Within that private realm there are wide variations in forest cover among neighbourhoods, something Melissa McHale has been monitoring.  She is an associate professor in urban ecology and sustainability at the University of British Columbia.

“People who come to Vancouver always talk about how amazing the trees are. They say Vancouver has a lot of tree cover but if you look at some of the data, Vancouver has very little tree canopy cover. At max in some of our neighbourhoods we’re getting 20 percent tree canopy and that’s what cities around the world have, and they’re not even trying to manage their tree canopy.”

In addition to her research work and teaching, McHale advises cities on urban ecology, ways to best design places to mitigate the effects of climate change.

“We know our cities are inequitable. Some of the most vulnerable people are in what we see as the hottest parts of the city. What a lot of us are saying is let’s start there. Let’s do something on the ground in those hot spots.”

McHale is adamant there are no quick fixes.

And it is needed most in the Downtown Eastside, Strathcona and other neighbourhoods where forest cover is as low as 6 to 8 percent. The Park Board and city have recognized that, and set a target of doubling the street tree density in below average blocks of the Downtown Eastside and Marpole by 2030.

Others measures are in the works including an update of the city’s Urban Forest Strategy. It will be completed next year. Recommendations will include ways to improve tree canopy on privately-owned land. So, will the city be able to convince more homeowners, commercial and industrial land owners to increase the greenery on their property?

In order to gauge what is happening with Vancouver’s tree canopy, remote-sensing technology (LiDAR) was flown over the city in August 2022.  The city will soon be analyzing the data and comparing it with the last flyover in 2018.

At the same time, the city is also reviewing its Protection of Trees Bylaw which governs the rules around tree removal. According to a city official, a major revamp of the bylaw has not occurred for a while and incremental changes have resulted in an ever changing rule book.

For Jennifer Baumbusch, a UBC Nursing professor whose health research focuses on older adults, tree canopy is important but is more of a long term goal.

“I think it can also distract from what needs to be done now. Last year we had over 600 people die due to the heat. What are we doing while these tree canopies are growing?”

In the past year, the city introduced changes to regulations for cooling in new buildings but they won’t go into effect for five years. Baumbusch is disappointed they aren’t being implemented sooner.

“I think we always have to look at the cost of implementing things versus the cost of not doing anything.  We see our hospitals being overwhelmed in BC during our last heat event. If we invest in this now, we are going to reduce the costs in the future and the impacts on other parts of the system.”

Baumbusch wants to see greater access to air conditioners and heat pumps in peoples’ homes and also more public education around the risks of heat illness.

“We can’t be sitting back and watching trees grow while people are suffering and dieing in the heat and other types of weather events.”

Melissa McHale remains optimistic about the future and is a strong believer in inspiring young people by sharing positive stories about sustainability.

“I have been a sustainability professor for a long time and my focus has been on cities because I think that is where we can have the most impact. We have the ability to design and build ecosystems. We need to harness that creative energy to solve problems and use it for good and I think we can.”