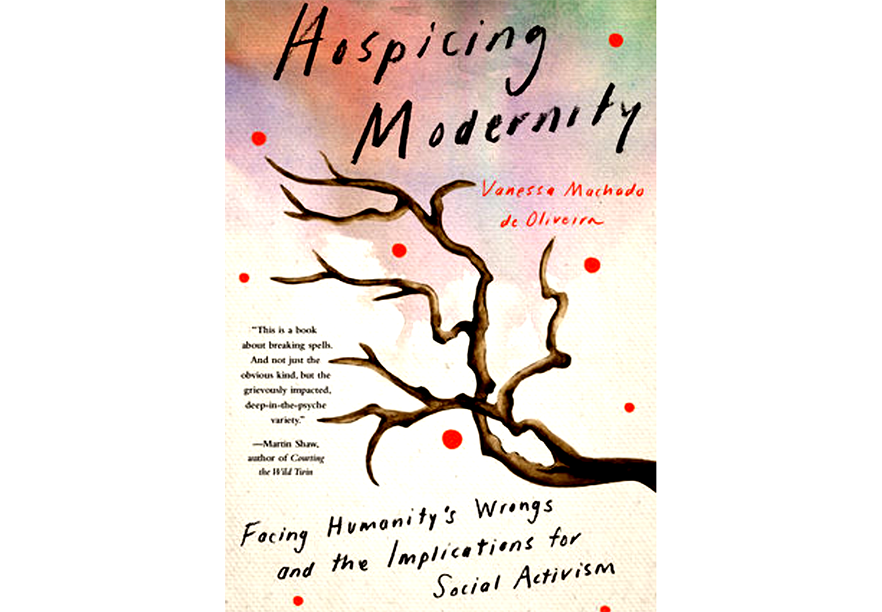 “So far, we have not been able to effect a major change of inner attitude that would enable us to return from our extractive, non-renewing, industrial way of life to an organic ever-renewing, land-based way of life.” – Thomas Berry (2001)

Over twenty years after Thomas Berry wrote those words, nothing seems to have changed, despite more reports of the voluminous evidence of the effects of “humanity’s” rapacious relationship with the planet, despite mountains of texts providing critiques, analyses and solutions.

Berry was writing three decades after the Club of Rome produced its clarion “Limits To Growth” (1972), stating in conclusion that,  “we are unanimously convinced that rapid, radical redressment of the present unbalanced and dangerously deteriorating world situation is the primary task facing humanity.” This followed ThichNhat Hanh’s Menton Statement of 1971: “This danger, of a nature and magnitude never before faced by man, is born of a confluence of several phenomena. Each of them would present us with almost unmanageable problems; together they present not only the probability of vast increases in human suffering in the immediate future, but the possibility of the extinction, or virtual extinction, of human life on Earth.”

At roughly the same time, Gary Snyder and colleagues published the classic manifesto[1], Four Changes, which states, “We have it within our deepest powers not only to change ourselves but to change our culture. If we are to survive on earth we must transform the five-millennia-long urbanizing civilization tradition into a new ecologically-sensitive, harmony-oriented, wild-minded scientific/spiritual culture.”

In East Corker, T.S. Eliot wrote, “I said to my soul, be still, and wait without hope
For hope would be hope for the wrong thing.” Fifty years after these calls, might we not be still hoping for the wrong thing? In 1973, Ernest Becker wrote “The Denial of Death”, a meditation on our elaborate, symbolic defense mechanisms against the knowledge of mortality. One of the Four Vows of the Bodhisattva runs,  “delusions are inexhaustible, may I transform them.” Might it be time to transform the delusion of the permanence of the world as we know it, in order to clear the space for something different?

If so, Vanessa Machado de Oliveira’s recent book, “Hospicing Modernity” might be pointing in a helpful direction. Vanessa currently holds the Canada Research Chair in Race, Inequalities and Global Change at the University of British Columbia and is a member of the Gesturing Toward Decolonial Futures (GTDF) collective. She is asking us to stop denying the death of the world as we know it and to live and respond with that awareness.

The central concern of the GTEC Reader is the climate crisis, accompanied by focus upon social justice and economic resilience.[2] Modernity is a frame within which we can see not only these, but all current crises, but it is a slippery frame, a frame of depth and layers, braided with the complexities of subject and object, a weave of treasure and shit.

Meditation on this dying moment, the magnificent and magnificently flawed historical construction that is both self and society, seems an urgent matter. If Modernity is the body of the climate crisis, the limbs and organs include the crisis of global inequality, the crisis of extinction, and the rest. The text invites us to participate in the threshold vigil of its passing away.

But every threshold is dangerous. Thus, in the second of three “preparatory chapters”(entitled “Why Read (Or Not) This Book”)we are cautioned about proceeding, to take heed. As the solidity of one’s world dissolves, one needs to be ready, willing, and able to walk a tightrope.

Modernity, as described by the author in the first chapter (Who The Heck Is Modernity?) is a person, with a very particular biography, with specific intentions, desires, hopes and fears. Not only has Modernity shaped the social world as we now know it, Modernity has shaped us, our bodies, our beliefs, even our perceptions.  Story teller Martin Shaw notes that the book is about breaking spells, “not just the obvious kind, but the grievously impacted deep-in-the –psyche variety.” Here is how Vanessa puts it, “This book is about how we inhabit the entity of modernity and how this entity inhabits and affects all of us, unevenly (this is not a competition).”

Attentive reading may enable or heighten an awareness of how we are shaped by Modernity while being encouraged to think that it is “I” who is in control. Dreamlike, we are both within and without. We are invited, through the text and associated exercises, to identify, name and dissociate (or otherwise engage) from what was previously experienced as integral to a sense of self. Those familiar with the practice of externalization in Narrative Therapy may recognize the move here.

In the collective, we don’t see colonialism as just the expansion of territory or the subjugation of people; we believe it starts with this foundational separability that interrupts the sense of entanglement of everything, that interrupts the sense that we are part of a metabolism that is the planet and that we belong to a much wider temporality within this metabolism. This separation takes away the intrinsic value of life within a wider whole and creates a situation where we are forced to participate in specific economies within modernity in order to produce value to ‘prove’ that we deserve to be alive.”

Following the “prep-work” of the first three chapters, comes the text itself, composed of ten chapters of stories and maps, weaves and waves of multiple takes on the functioning of Modernity and our capacity to sit with It as It dies.  In Vanessa’s words, these chapters “seek to move us to experience and observe manifestations of modernity and ourselves within it differently….as we face the storms ahead of us with more humility, honesty, humour, and hyper-self-reflexivity.”

These ten chapters are concerned with the braids with which Modernity is woven, questioning how modernity is internalized and how it becomes faster than thought; how arrogance, rooted in Hierarchy, is such an integral part of Modernity and is systemically and institutionally sanctioned and perpetuated. In a sense, these chapters may be conceived as the threshold experience within the context of a persona/cultural rite-of-passage. There has been a severance from the world of Modernity, but the advent of a new world has not yet arrived. We are in the twilight zone of the threshold, betwixt and between. The book offers descriptive, conceptual and narrative maps that enable an orientation to this watery realm.

While separability is the foundation of the House, its walls or carrying structure, represent its hidden costs. “It draws attention to the externalized and invisibilized price of building and maintaining the house through historical and ongoing destitution; dispossession; and epistemicides, genocides, and ecocides.” An example of this might be the current evocation of the electric vehicle, along with other radical technological fixes, as the great panacea for the climate crisis.  In The Tyee recently,  AndrewNikiforuk[3] provided a compelling argument that “these machines will energize and expand the globe’s energy intensive mining sector.”

This will weaponize extractive mining around the globe with social and environmental costs being borne primarily by indigenous and other inhabitants of the global south. Electric vehicles might be seen as the tip of the iceberg of the Modernist, anthropocentric assault on Gaia as those in the global North imagine ways to perpetuate their privileges within Modernity. The pleasures and desires of those in the north are sated through the suffering in the south, which is made invisible, as is the violence perpetrated on the earth through extractivism.

While those who continue to benefit from Modernity are unlikely to resist it, the book posits several orientations to changing it: soft, radical, and beyond reform. The first focuses upon policy and practice that extends the benefits of modernity (e.g., social mobility, the order and belonging of nation states, the values of Western humanism, individual freedom) to those currently excluded from access to these “gifts”. Social injustice is remedied by absorbing and assimilating the disenfranchised into existing institutions while leaving the structure of Modernity intact.

Radical reform, on the other hand, understands that “oppression and marginalization are by-products of modernity’s structures of domination.”  It seeks a radical restructuring of modernity by “making more space for different knowledge, peoples, and experiences, and reallocating resources to support their presence (leading to) the transformation of an institution/system.”

“The distinction between the radical and beyond-reform spaces is the recognition that the addition of other ways of knowing, and the redistribution of resources within existing institutions, will not in themselves be adequate to shift the underlying violent and unsustainable infrastructures of the modern/colonial system. Soft- and radical-reform spaces can be interpreted as placing modernity on life support – regardless of the costs or consequences – while beyond reform spaces move modernity into palliative care….Colonialism is identified as the constitutive underside of modernity: inherently extractive, relationally unethical, and ecologically unsustainable- and therefore modernity cannot be reformed.”

The challenge posed by this book is to recognize the operations of Modernity within our consciousness, acknowledging our enmeshment with these operations at even a biophysical, neurological level, and the privileges accruing from our engagement with it. Once identified, we are then in a position to change our relationship with Modernity. In many ways analogous to the basic Buddhist diagnostic framework, Hospicing Modernity lays out a provocative path towards the future, eschewing both false hopes and nihilistic despair.

The first ennobling truth of the Buddhadharma is that of suffering. Until the daily experience of existence is truly known as “suffering”, it will of necessity persist. There is actually no need or drive to investigate the causes and conditions of suffering, nor proceed to a release from it. The denial of death and impermanence is a lynchpin of the experience of suffering..

The discovery of the suffering implicit in Modernity can come as a shock.  Inevitably, some passengers on the bus of our identity will forcefully resist the death of the support system that is Modernity. Throughout the text, we are encouraged to be gentle with ourselves in this undertaking, to regard ourselves as cute and pathetic.  We are invited to cease aggression toward our self, with precision and gentleness.

The book does not offer any solutions to our situation. For encouragement going forward it offers the metaphors of “the eye of the storm”, “the tightrope”, and “composting shit.” “Facing the good, the bad, the beautiful, the ugly, the broken and the messed up of humanity within and around us is the first step in preparing for when things start to fall apart.” We are encouraged to remember that it is not the world that is ending but the world as we know it.

The rite of passage within which we find ourselves, if successfully undertaken, may give birth to a new identity, a way of being that is hinted at by indigenous traditions and wisdom teachings that have survived at the margins of Modernity forever. We may discover that the “capacities and dispositions that have been exiled by modernity can move us away from the sense of separation between us and the planet, other animals, other beings, and each other.”

Returning to Eliot: “Wait without thought, for you are not ready for thought:
So the darkness shall be the light, and the stillness the dancing.”  To get there from here will require a leap of the imagination, as always.

Scott Lawrance is a writer who lives in Cumberland, B.C. He has done a lot of stuff, read a lot of books, and is disappointed that the world is getting worse, but it’s still a beautiful place to get born into.