Housing Co-Ops – Working Together For A Greener Community 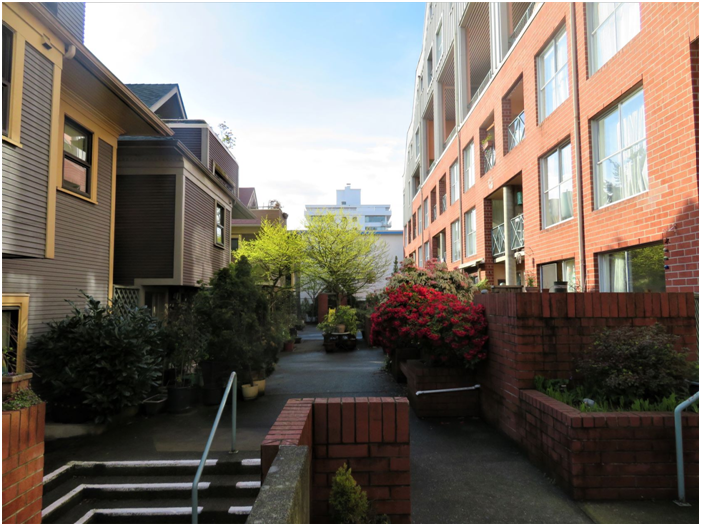 Ben Bryce grew up in a home that was more environmentally aware than many others.

Later, as a university student, Ben organized a small fund-raising event which collected 150 dollars for an environmental cause.  Since then, he has remained interested in questions around climate change.

Bryce doesn’t consider himself an activist but he has become a leading voice on environmental sustainability at his West-End Vancouver housing co-op.

“I’ve been concerned, aware of the growing storm we now have.  I joined the sustainability committee the day I moved into the co-op five years ago.”

Bryce, an assistant history professor at UBC, his wife and five-year-old son live in Pacific Heights Housing Co-operative (PHHC). Its courtyard is framed by eight heritage designated homes and a six-story apartment building. With 91 units and about 200 people, it is one of the largest housing co-ops in the province. (In full disclosure, I am a resident of the Pacific Heights Co-op).

Pacific Heights has a long history of going green with an active recycling program but it has expanded its efforts in the last few years. A key development came when members approved a comprehensive sustainability mandate affecting operations and life of the buildings.

The mandate’s goal states, “Environmental sustainability is about meeting our own needs without preventing future generations from meeting theirs.  Our co-operative believes that environmental protection and sound business practices go hand in hand. We will strive to manage our property in an environmentally sustainable way and will seek to influence our members’ and suppliers’ practices to the same end.”

As chair of the co-op’s sustainability committee, Bryce has seen many positive results including a well-organized waste diversion system which isolates paper, soft and hard plastics, glass, battery and light bulb collection, as well as compost.

“We have various members who monitor our collection bins to ensure they are not overflowing. They compact milk jugs. Many people participate in the management of our recycling programs. We are reducing our garbage by at least ten percent.”

Another success story has been the Co-op’s efforts to encourage the use of bicycles.

“We have been making sure there is enough space to store bikes in the garage which we now estimate to be about 150. We secured a micro grant to install more bike racks and we’ll be offering a bike tune up clinic.”

A major thrust for Pacific Heights has been to reduce the buildings’ water and energy consumption. This is being achieved through such measures as replacement of windows, improved weather stripping and insulation, and installation of more efficient shower heads and water faucets. Some of these initiatives have been achieved through partnerships with BC Hydro and Fortis.

Bryce is especially pleased with a project to replace 80 old toilets with low flush ones. Funding for the program was covered by the co-op’s capital reserve along with four thousand dollars from the Greener Co-op Microgrant program administered by the Co-operative Housing Federation of Canada.

“Replacing the toilets will save our co-op almost eight thousand dollars in water and sewage fees annually. We are saving two million litres of water every year from this project. The savings in water and sewage will reduce our co-op’s costs for years to come, thereby helping our long-term financial sustainability,” says Bryce.

Pacific Heights has also taken advantage of a rebate program offered by the province to encourage the use of electric vehicles (EV).  Four EV charging stations have been set up in the garage to serve a total of 16 stalls.

“It’s about making it more convenient to switch to electric vehicles. There is only one EV car now. I would be shocked if we have only one a year from now because I have received several inquiries.”

Along the way Pacific Heights has developed its sustainability policy and connected with other housing co-ops through the Co-operative Housing Federation of British Columbia (CHFBC). CHFBC is the umbrella group for about 270 non-profit housing co-ops in the province, accounting for 15,600 homes.  In Metro Vancouver, there are 215 co-ops.

“I spoke with the Co-op (Griffins Walk) that was ahead of us who had EVs already.  It was helpful in making decisions about what service to purchase. Once installed, we had another co-op (Sojourn) who asked about our experience,” adds Bryce.

“How many people care about environmental sustainability within the co-op movement is quite heartening,” says Kathryn Sheps, vice-chair of the CHFBC’s Climate Emergency Task Force.

The Task Force was set up to support housing co-ops become more environmentally sustainable and resilient. It is reaching that goal through consultation, and a variety of educational tools.

Sheps is a marine scientist who has worked for various organizations on climate issues including Simon Fraser University’s Centre for Dialogue where she brought people and communities together to help manage climate change. She thinks housing co-ops are well positioned to tackle complex issues.

“Co-op members are used to looking after each other in a way that is appreciated. They’re a really great starting place for reckoning with climate impacts and adaptations to climate change that are important in terms of resilience and sustainability. One of the best arguments for housing co-ops is that sense of sharing resources and collective decision making,” says Sheps.

She knows firsthand what co-op living is all about.  She and her family reside in the Yew Street Co-op in Kitsilano. It’s one of the oldest and smallest Vancouver co-ops consisting of six duplexes.

“In my co-op, we have huge gardens that help us with food security as well as creating a beautiful space for us to enjoy. We’re in the middle of a single family neighbourhood. We have people coming by all the time to look at our gardens and to talk with us. We keep our fences low for that very reason. We want to engage with people who are walking by. This is the collective work of six families. You are seeing their shared effort. It surprises people at times,” says Sheps.

A Model for Multiple-Unit Residential Buildings

CHFBC does not collect figures or data on housing co-ops’ actions toward sustainability nor do municipalities in Metro Vancouver.

From 2018 to 2019, Metro Vancouver initiated the Strata Energy Advisor plan, a pilot program to inform decision-making at stratas and co-ops by providing support through identifying, approving and implementing energy conservation measures. The city of Vancouver says it is supportive of the program continuing beyond the pilot phase but it has been unable to say how many stratas and co-ops participated in the pilot.

On another front the city of Vancouver, in partnership with the BC Non-Profit Housing Association, BC Housing and Clean BC, is designing a new program called the Zero Emissions Building Retrofit Strategy. It will offer planning and funding support for heat pump retrofits.  The focus would be on decarbonizing space heating and domestic hot water heating which burn gas. The city states it will be consulting with stakeholders like CHFBC as the program moves forward. What that means for housing co-ops remains to be seen.

“It’s a challenge for people to find and maintain groups of interest that are working together on different things. I think it’s something we have lost a little bit. However, housing co-ops have it. They already are committed neighbours working together to help keep their space preserved or improved. That is already a step towards climate action, a really big step that single family home owners or renters in big apartment buildings don’t necessarily have.”

It’s a situation all too familiar to Mahbod Rouhany, an adjunct professor at UBC, President of Strategic Carbon Management, and an experienced Greenhouse Gas inventory and carbon offset expert.

Rouhany has developeda program to collect useable clothing, linen and shoes from metro Vancouver buildings, material that otherwise is thrown away. Rouhany says there has been a dramatic increase from 2016 to 2020 in the tonnage of textiles dumped at the Metro Vancouver landfill.

“I challenge you to find a waste stream in landfills growing at this pace. This is the only one I could find that is growing exponentially.”

Rouhany’s program currently offers a free bin and collection service for high-rise buildings. While his company has set up a total of 40 bins in buildings, he’s frustrated with the reaction from many stratas and local governments.

“They say great idea…maybe you should do a pilot. Governments aren’t willing to help get these free bins. I cannot reach strata councils. We have the capacity to put a bin in every single high rise in Metro Vancouver. A lot of stratas still have major challenges in separating recyclables from their garbage. I can take out a big chunk of waste textiles in landfills.”

Rouhany is impressed by what housing co-ops are doing to improve their living spaces.

“Since coming to Canada, I realize how little I know my neighbours. I have been searching for that sense of community and collaboration.”

Kathryn Sheps believes co-ops can take on a greater leadership role in communities.

“Housing co-ops are ahead of the game in terms of environmental sustainability and social sustainability. I think it would be great to see more co-ops taking initiatives, recognizing themselves as sustainability leaders, thinking of how they might provide a model for, as an example a welcoming space for community members in their neighbourhoods. We’re accustomed to sitting down with other neighbours on tough choices.  That’s going to be required in responding to climate change,” adds sheps.

At Pacific Heights Housing Co-op, Ben Bryce is looking forward to new initiatives, possibly another project to replace old windows.  Bryce can likely count on the support of residents in his co-op. There hasn’t been opposition to previous environmental measures.

“There has been general acceptance and concern about climate change. The biggest challenge is financial. You can’t do everything at once. Grants have been very helpful to mobilize projects. If you build sustainability into your asset management plan, it will help with overall costs.”