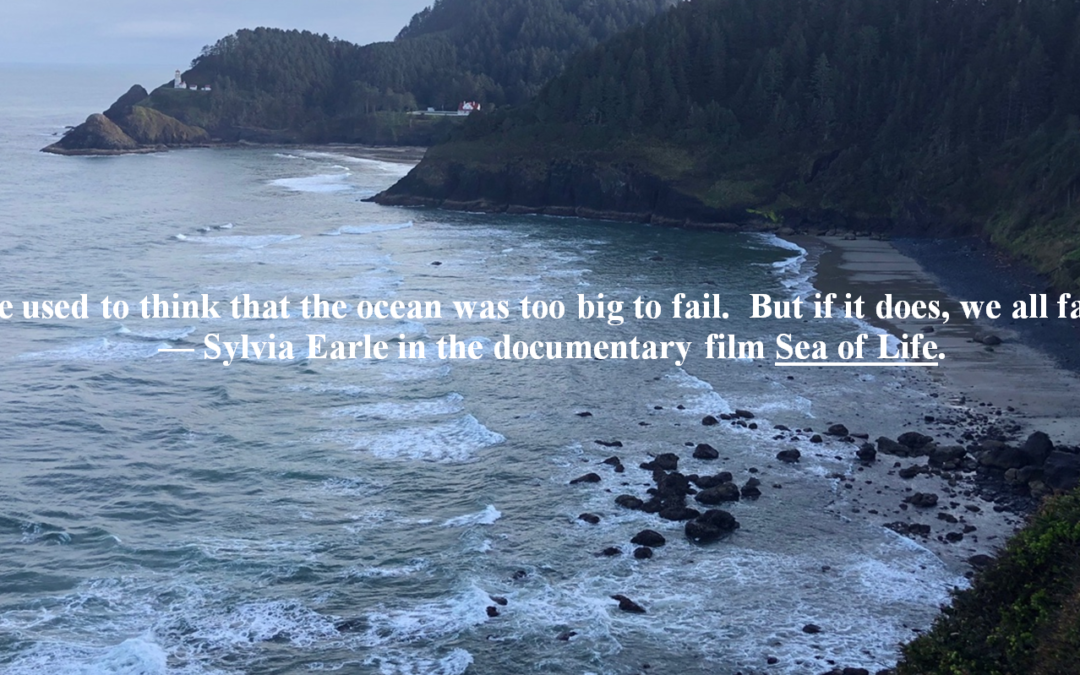 The United Nations has proclaimed the 2020s to be the Decade of Ocean Science for Sustainable Development. According to the proclamation, “The marine realm is the largest component of the Earth’s system that stabilizes climate and supports life on Earth and human well-being. However … much of the ocean is now seriously degraded, with changes and losses in the structure, function and benefits from marine systems…. Adaptation strategies and science-informed policy responses to global change are urgently needed.”

Two recent publications echo this message of oceanic urgency. Ocean: A Global Odyssey is an encyclopedic tome produced by the National Geographic Society and authored by Dr. Sylvia Earle, a celebrated American oceanographer. The Ocean’s Whistleblower, by David Gremillet, is a biography of UBC fisheries researcher Dr. Daniel Pauly.

Gorgeous marine photographs in the National Geographic tradition adorn half the 500+ pages in the hefty Ocean volume. But the text is substantial too, explaining the origins of the Earth and its oceans; documenting the immense variety of life forms in the seas; and describing human involvement through ocean exploration, shipping, resource extraction, recreation, etc. An atlas section contains detailed maps of the world’s oceans, seas, saltwater bays and gulfs.

Concluding chapters of the book discuss how the ocean affects global climate and how climate change in turn is threatening the ocean’s equilibrium. “Energy from the sun reaching the Earth is mostly absorbed by the ocean, where the capacity to soak up heat is a thousand times that of the atmosphere….Movement of cold and warm water masses by ocean currents shapes the climate over land and sea….Warmer temperature affects the water cycle that underpins climate and weather, impacting everything from storms to floods and droughts and the overall distribution of life on Earth.” And of course the planet has been getting warmer. “Evidence gathered in recent decades confirms that the current rise in global temperature is linked to increased levels of carbon dioxide and methane in the atmosphere, caused by mining, by raising industrial livestock, and mostly by burning coal, oil and gas. Deforestation, land use and overfishing destroy natural carbon capture processes, exacerbating the problem. We can look to the ocean as the foundation of Earth’s climate, and we can look in the mirror to find the cause of current climate disruptions.” (Ocean, p. 360)

Environmental scientists have identified “critical thresholds in Earth’s natural systems that must be respected to maintain habitability. Thresholds already crossed include climate change, biodiversity loss and extinction, ocean acidification and ozone depletion.” (Ocean, p. 390) Mankind’s urgent challenge is to arrest these trends and rebalance these natural systems, of which the ocean is critical.

The Daniel Pauly biography as told in The Ocean’s Whistleblower is an incredible tale of overcoming humble beginnings.  The product of a fleeting union between a young Frenchwoman and a black American soldier at the end of World War Two, Daniel had a poverty-stricken childhood in Switzerland with somewhat abusive surrogate parents, and very sketchy schooling despite his obvious intelligence.  Nevertheless he became a voracious and omnivorous reader at an early age, teaching himself several languages.  Then at 17 he escaped to Germany where he completed his high school education while working various factory jobs.

Later Pauly attended an esteemed oceanographic institute in Kiel, a German port city on the Baltic Sea.  Here he found his calling: the study of fisheries.  Work assignments in Africa and Indonesia kindled his interest in tropical fisheries, and provided raw material for his master’s and doctoral theses at the institute.

In 1979 Dr. Pauly went to work for the International Centre for Living Aquatic Resources Management (ICLARM) in the Philippines, where he would stay for 15 years.  One of his first reports was a critique of Southeast Asian governments for “developing industrial fisheries for export despite the fact that artisanal fishing actually employs the most people and feeds the local population”.  More than 40 years ago, Pauly foresaw that these policies risked depleting the living resources of the ocean.

Collaborating with numerous colleagues around the world in subsequent years, he developed methodologies for measuring the biomass of aquatic ecosystems and compiled multinational fisheries catch data from the Food & Agriculture Organization (FAO) archives and other sources, to demonstrate that “Malthusian overfishing” was threatening species collapse in many oceanic regions.  One early example that validated Pauly’s argument was the destruction of the cod fishery off Newfoundland by the early 1990s.  And more recently, Alaskan seiners have decimated the West Coast wild salmon population.

In due course ICLARM became embroiled in funding and management controversies, which hampered the work of the scientists there.  And so in 1994 Daniel Pauly was hired as a full professor at a new fisheries research centre at UBC.  Since then his prodigious output of research on the productivity of the world’s oceans and their depredation by industrial fishing has been published in prestigious scientific journals like Nature and Science.  In his career he has written or co-authored more than 500 scholarly papers and 30 books.

Among Pauly’s conclusions: the ocean’s resources are not infinite, and the current volume of worldwide fisheries is not sustainable.  The mass harvesting of large predators like tuna, sharks and swordfish has resulted in the precipitous decline of these species, forcing the industry to focus on smaller fish.  This too is unsustainable at present catch levels.  Pauly coined the phrase

“fishing down marine food webs” to describe this sequential plundering.  He has called for new strategies of fisheries management to rebuild all these piscine population levels through the establishment of marine protected areas (i.e. no-fishing zones), the elimination of government subsidies to the industry, and the creation and enforcement of stricter catch quotas.  He contends that actions like these are needed on a global basis to bring the ocean’s ecosystems back into balance.

The biographer of The Ocean’s Whistleblower leavens his scientific narrative with details of Daniel’s family life; his leftist, feminist and anti-racist political views; and the “heroes of the planet” who have inspired him — from Charles Darwin to Rachel Carson and Farley Mowat.  This Daniel Pauly story is a well-written biography about a modern-day environmental hero whom Canada can claim as our own.

Sylvia Earle has been instrumental in pursuing similar goals.  For some background on Dr. Earle’s life and work I recommend Mission Blue, an award-winning 2014 documentary film.  She was a pioneer in undersea exploration, and over her long career has directly observed the rapid deterioration of ocean ecosystems such as coral reefs and the depletion of marine life.  Dr. Earle founded the Mission Blue nonprofit more than a decade ago as an alliance of environmental organizations and concerned individuals with the purpose of creating marine protected areas called Hope Spots.  At the time only about 1% of the world’s oceans were sheltered from resource extraction (fishing, mining etc.) and other human impacts (shipping, recreation, pollution etc.).  By 2020 that envelope of protection had increased to 10%, and Mission Blue’s goal is to have 30% of the ocean protected by 2030 in order to facilitate its recovery.  Ocean: A Global Odyssey highlights 16 of these Hope Spots around the planet, in glorious colour.

Other hopeful developments are chronicled in the Ocean volume.  In 2020 and 2021, the coronavirus pandemic has resulted in an “Anthropause”, a dramatic reduction in human travel, industrial production and other fossil-fuel burning and polluting activities, which in turn has enabled some recovery and restoration in the natural environment, including the oceans.  How can we sustain this reversal?  The United Nations Convention on the Law of the Sea (UNCLOS), now ratified by 160 countries, enables coastal nations to establish and enforce Exclusive Economic Zones and thereby control the harvesting of living and nonliving resources up to 200 nautical miles offshore.  However control of the High Seas beyond those boundaries remains elusive.  Meanwhile, ongoing scientific research, aided by new technologies of ocean exploration and conservation, continues to raise public awareness of the perils and prospects of our evolving oceans.

But in the 21st century it seems likely that to uncover the beauties of the underwater world and sound the alarm on its threatened status, more hearts and minds will be touched by visual media than the literary exposes of the past like Rachel Carson’s The Sea Around Us or Farley Mowat’sSea of Slaughter.  For example, the cruelty, wastefulness and biodiversity implications of industrial overfishing and plastics pollution in the seven seas have recently been depicted by the documentary films Sharkwater Extinction (2018) and Seaspiracy (2021).  Televised series narrated by David Attenborough, David Suzuki and others have also vividly revealed how the world’s aquatic and terrestrial ecosystems are rapidly degrading in the face of human interference.

Nevertheless, books like the two highlighted in this article, and their accompanying maps, tables and photographs, are helpful in documenting the importance of the Earth’s oceans to the survival of all life on the planet.