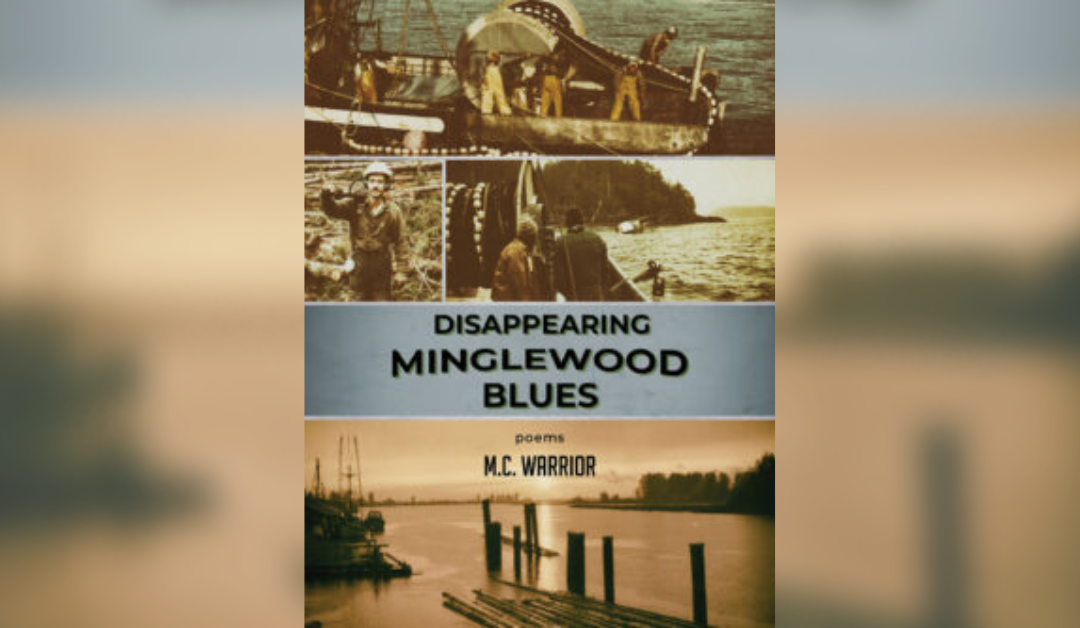 This review was initially published in The Ormsby Review, now renamed The British Columbia Review in September 2020, and is published here by permission of the author.

In Disappearing Minglewood Blues, a collection of poems written over several decades, M.C. Warrior gives voice to the mostly voiceless, often nameless, persons who toiled and laboured, navigating and negotiating, or falling victim to, the multiple dangers involved with logging and commercial fishing along the coasts and ocean of British Columbia. Warrior eloquently recalls, recollects, and remembers the memories and lives of others, some dead, others forgotten. To suggest that his poetry is of the genre sometimes described as labour poetry is to provide only a thin description of the soulful ways in which Warrior articulates his own, and others’, lived experience logging in the forests and commercial fishing upon the ocean waters of British Columbia.

Warrior is a co-founder, with poets Kate Braid and Tom Wayman, amongst others, of the Vancouver Industrial Writer’s Union. Warrior worked in the forest industry for ten years, and he stood as an IWA steward, and logging Camp Chairman. Warrior was also on the Executive Board of the IWA Haney Local 1-367.

Warrior spent some twenty years commercial fishing along the BC coastline as a member of the United Fishermen & Allied Worker’s Union, of which he was Secretary-Treasurer. Additionally, in latter years, Warrior worked as Executive Director on Vancouver Island for Habitat for Humanity. He is author of Building the Power: A History of the Labourers’ Union in British Columbia (2016), an account of workers’ resistance to capital and wage oppression, and of activism associated with the creation of trade unions out of struggle. Warrior is also co-author, with Mark Leier, of The Light at the End of the Tunnel: A History of the Tunnel and Rock Workers Union of British Columbia Local 168 (1992).

In Warrior’s early poetry there is a sense of loss, a sense of mourning, as he provides elegiac descriptions of the loneliness and patience associated with both logging and commercial fishing, of living and toiling amidst the woods, of living on fishing boats waiting for the fishing runs to be announced.

As the opening poem, “Lock Bay Elegy,” observes, “this coast’s/ arterial blood — log barges, freighters,/ fish boats and their packers,” — forms of transport that, in Warrior’s hands, commemorate but don’t romanticize the often hazardous labour contributing to the economic infrastructure of British Columbia.

…a world
where wildcat strikes and blacklists,
violent death and crippling injury
are not just the stuff of folksong
but threads in the weave
of everyday life.

In “MacMillan Bloedel Ltd., Franklin River Division,” Warrior writes that “the sense of loss/ is crushing…” as he awaits the whistle blow announcing lunch break, or even better, the end of the workday. As Warrior exclaims, “…jesus, eight fucking hours till quitting time” (“quitting time”).

Solace comes with sleep and dreams, as in “Percy Logging, Powell Lake Division:”

yet before I can reach him, Mike
rolls over, slowly struggles to pick himself up

as we head along Tlatlos North, unlacing
our caulks with numbed fingers, we joke
about those dead loggers stashed behind stumps
till the end of the day who now flit hungrily
across our sidehills.

our memories are long
our laughter terrible.

Warrior explains in a note that “dead loggers stashed behind stumps = In the 1930s, if you were killed on the job, your body was stashed behind a stump until the end of the day so as not to interfere with production.”

In the early poetry, Warrior has written paeans to workers of the woods and the sea, rendering their experiences transparent, while offering a thoughtful, yet not a strident, critique of the economic system within which working people struggled and existed.

In a more recent poem, composed in 2018, Warrior ruminates, observing:

for if not now,
when?

still, in silence is a beginning

In his latter poems, Warrior is reflective, writing of experiences close to home, of children and family, meditation, his reading history and his accounting for his life within the present. Garcia Lorca, Dylan Thomas, John Coltrane, and others are referenced. It appears that with aging comes acceptance, and a deepened recognition, rooted within his decades’ long work experience, of impermanence:

to an elusive feeling that today
i know still less
about even more… (“becoming Euclidean”).

In “Timor Mortis Conturbat me: A Satire,” Warrior — having spent a lifetime extracting trees from the forests and fish from the sea — pauses to consider climate change and the environment:

…our sun is decaying
and in its death throes will one day melt our mountains
and boil the oceans dry, meanwhile, chance —
wars, earthquakes, floods — and time itself
will continue conspiring to preserve the tedious deeds
of Assyrian and Mayan kings while Harappan scribes,
Paleolithic cave painters, and Neanderthal flautists
remain nameless and obscure.

Warrior’s final poem, and the title poem of this collection, “Disappearing Minglewood Blues,” is a rewriting of the song “New Minglewood Blues,” written in 1930 by Noah Lewis, regarding a company town situated near Memphis, Tennessee. In a note, Warrior acknowledges that he heard this song on the Grateful Dead’s first album (1967).

Fittingly enough, for a book of poetry predominantly dedicated to describing and celebrating working life, this year marks the fiftieth anniversary of the classic Grateful Dead album, Workingman’s Dead (1970).

Colin James Sanders lives on BC’s Sunshine Coast, where he often walks past (Peter) Trower Lane in Gibsons, named for another great poetic chronicler of the working classes.