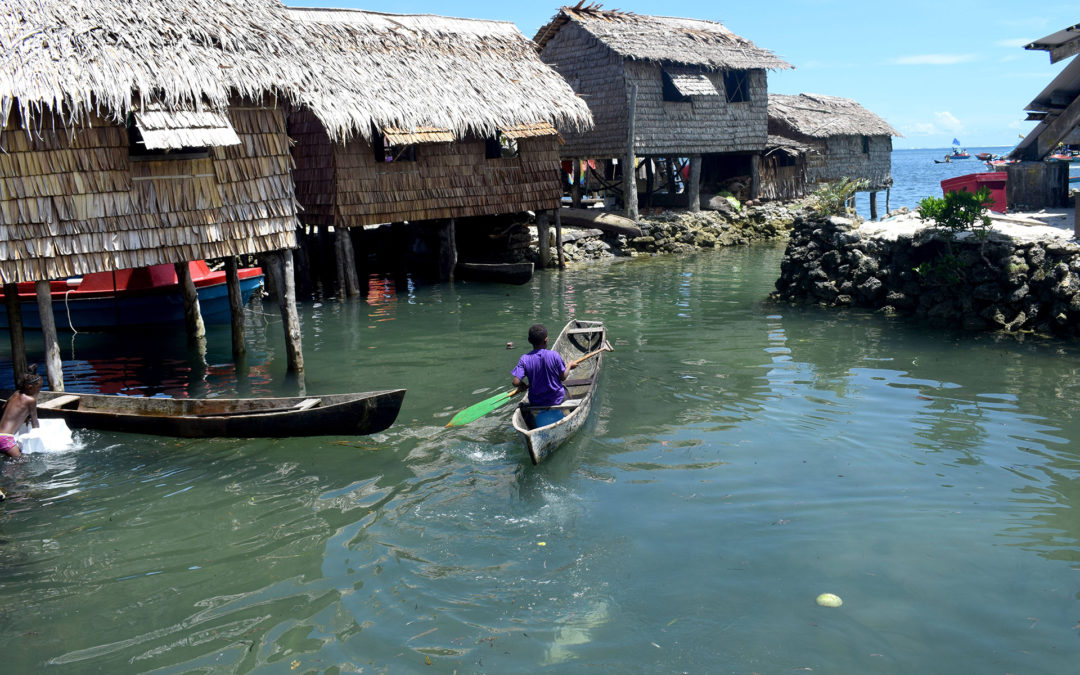 Lynton Aaron Filia Solomon Islands Photographer’s Caption: SOLOMON ISLANDS, North Malaita—The Artificial Islands of Lau lagoon located on the northern region of Malaita province of Solomon Islands are facing impact of climate change. Captured in this photograph is an Artificial Island called Niuleni. This photograph was taken on December 2016 during a trip made to the Island accompanying the community members to launch its clean water and sanitation project. Niuleni Island and other neighboring artificial islands are facing sea level rise and it makes them vulnerable to weather and climate. The islands were built 500 years ago, and to date, the habitat is experiencing sea level rise, which is becoming worse during king tides that sometimes flood the interior of the islands.

Climate change is the defining challenge of our time, yet it is still accelerating faster than our efforts to address it. Atmospheric levels of carbon dioxide are higher than they have been for 800,000 years, and they are increasing. So, too, are the catastrophic effects of our warming planet – extreme storms, droughts, fires, floods, melting ice and rising sea levels.

In 2015, the world’s nations recognized the urgency and magnitude of the challenge when they adopted the historic Paris Agreement on climate change with a goal of limiting global average temperature rise to well below 2 °C while aiming for a safe 1.5 °C target. The unity forged in Paris was laudable – and overdue. But, for all its significance, Paris was a beginning, not an end. The world is currently not on track to achieve the Paris targets. We need urgent climate action and greatly increased ambition – in emissions reductions and in promoting adaptation to current and future impacts of climate change.

Success demands broad-based concerted action from all levels of society, public and private, action coalitions across all sectors and the engagement of all key actors. There is no time, nor reason, to delay. The dogma that pollution and high emissions are the unavoidable cost of progress is dead. Investing in climate action makes sense for the global environment, improved public health, new markets, new jobs and new opportunities for sustainable prosperity. Failing to act will simply consign all of humanity to ever-worsening climate calamity.

That is why I urge Parties to vigorously implement the Paris Agreement and to increase their ambition commensurate with the demands of science. The United Nations – led by UN Climate Change – will provide support every step of the way. There is no alternative to decisive, immediate climate action if we are to safeguard the future of this and future generations.

Our planet is warming. An astonishing 17 of the 18 warmest years on record have occurred in the twenty-first century. The past three years were the hottest since records began.

With this warming comes climate change, causing extreme storms, droughts and floods. We witnessed these climate disasters many times in 2017 and were shocked. Yet, these are only the most dramatic and visible impacts. Other upheavals range from reduced crop productivity to forced migration. Climate change is the single biggest threat to life, security and prosperity on Earth.

Faced with the challenges of climate change, the United Nations, governments at all levels, civil society, the private sector and individuals are acting to limit global temperature rise to agreed levels and to help vulnerable communities adapt to the effects of climate change we cannot avoid.

UN Climate Change’s mandate is to lead and support the global community in this international response, with the Paris Agreement and the Convention being the long-term vehicles for united global climate action.

For UN Climate Change, much of 2017 was about the hard work of ironing out the details of the new climate regime. This is a laborious process. Without it, however, the Paris Agreement will have no impact.

COP 23, presided over by Fiji, demonstrated that there is an unstoppable climate movement supported by all sectors of society across the globe. Almost 30,000 people took part: Heads of State, ministers, delegates from Parties, private sector and civil society leaders, representatives of international organizations, youth groups and indigenous peoples, and many more. During the conference, financial commitments amounting to almost USD 1 billion to tackle climate change were made.

Building on the negotiations over the years, we saw key decisions made by governments, many of which broke new ground. The Talanoa Dialogue, which will inform and inspire Parties as they review their commitments and revise them upwards. The first-ever Gender Action Plan, which will increase the participation of women in climate change responses. The first-ever agreement on agriculture and climate, which will address both vulnerabilities and emissions in this key sector. The first-ever platform for indigenous peoples and local communities, who can now share their valuable perspectives on climate change.

These decisions to bring in new voices, partners and action areas are vital if we are to succeed in meeting the challenges of climate change. This is why UN Climate Change in 2017 focused increasingly on cooperation and coherent action on climate, sustainable development and disaster risk reduction, both within the United Nations system and with external partners.
We also saw advances in climate finance. The Adaptation Fund broke its single-year resource mobilization record, raising USD 95.5 million.

UN Climate Change continued to deliver on its core tasks: supporting negotiations, including laying the groundwork for the Paris Agreement work programme, monitoring and analysing commitments to build transparency and trust, increase the capacity of developing countries to adapt to climate change and providing science to help Parties shape their actions on climate change.
There is much to do in 2018. We need to support Parties to increase pre-2020 action. Those Parties that have not yet done so should ratify the Doha Amendment to the Kyoto Protocol. Parties should use the Talanoa Dialogue as an opportunity to engage with one another and increase ambition under the Paris Agreement. In 2018, it is critical that the outcomes of the Paris Agreement work programme are adopted at COP 24 in Katowice to ensure we are ready for the implementation of the Agreement.

“UN Environment and UN Climate Change have a proud history of working together to protect human health and the environment – on everything from advancing carbon neutrality to providing the cutting-edge science that underpins climate negotiations and drives action. We have made an impact, but the moment has come to take ambition to the next level. Working with many other partners, we can help lower emissions, spark game-changing investments and bring hope to vulnerable communities. Together, we can deliver a safer climate for all the peoples of the world.”

At the same time, we must further align planning and action on climate change with the United Nations Sustainable Development Goals and the Sendai Framework for Disaster Risk Reduction 2015–2030, taking advantage of complementary action that supports all three global agendas.

In this regard, the work of the clean development mechanism deserves a mention. Work under the mechanism, highlighted in this report, shows that actions to mitigate climate change bring many co-benefits in human health, green jobs, poverty reduction and other aspects of development. As we look towards establishing a new sustainable development mechanism under Article 6 of the Paris Agreement, we should bear these successes in mind.

We all know the magnitude of the task ahead, and what we must do. This annual report – another first – shows how UN Climate Change is doing everything it can to support, encourage and build on the global response to climate change.

The motto of COP 23 was “Further, faster, together”. Throughout 2018 and beyond, let us continue to be inspired by this message and do all in our power, together, to accelerate action. Only by doing so can we succeed in protecting our planet from climate change and securing a low-carbon, sustainable future.

“The Paris Agreement has set the world on a long-term path to a low-carbon future, but we will require international cooperation on an unprecedented scale to succeed. The United Nations Development Programme is committed to providing long-term support to the Paris Agreement and UN Climate Change by scaling-up climate change action, building resilience and assisting countries to pursue zero-carbon, sustainable and inclusive development. Together, we can and will help nations meet their climate commitments.”

Since the adoption of the United Nations Framework Convention on Climate Change in 1992, the international community has entrusted its secretariat with a growing responsibility to strengthen the global response to climate change and close the gap between ambition and achievement.

In 1997, Parties to the Convention adopted the Kyoto Protocol, which created binding emission reduction targets for developed countries. During its first commitment period, 2008–2012, 36 industrialized countries and the European Union pledged to reduce their emissions by an average of just over five per cent compared with 1990 levels. Despite the challenges of the Kyoto Protocol, the actions emanating from the implementation of the Kyoto Protocol have kept emissions lower than they otherwise would have been (see graphic).

The Paris Agreement is the latest and most ambitious undertaking by the international community to prevent dangerous human-induced climate change. In Paris in December 2015, countries pledged to limit the rise of global average temperature to well below 2 °C and as close as possible to 1.5 °C above pre-industrial levels. They also agreed the crucial ways to achieve that goal, through nationally determined contributions and an unprecedented level of global cooperative action across all sectors.

“Unless the world acts decisively to begin addressing the greatest challenge of our age, then the Pacific, as we know it, is doomed.”

Despite progress in the global response to climate change, it has yet to reach the scale and speed needed to stabilize the global temperature at a safe level.

Climate change, together with other megatrends – population growth, rapid urbanization, food insecurity and water scarcity – increases competition for resources and heightens tensions and instability. Coherent action under the 2030 Agenda for Sustainable Development, the Paris Agreement and the Sendai Framework for Disaster Risk Reduction represents the best opportunity for confronting and managing these trends. If we do not address climate change, we will not achieve the 2030 Agenda. Moreover, “keeping global temperature well below 2 °C is the greatest long-term contribution that governments, local governments and the private sector can make to disaster risk reduction,” according to Robert Glasser, the UN Secretary-General’s Special Representative for Disaster Risk Reduction and Patricia Espinosa, UN Climate Change Executive Secretary.

A peaceful, healthy and prosperous future requires strong and wide-ranging action under the Convention, the Kyoto Protocol and the Paris Agreement.

“The Paris Agreement, the Sustainable Development Goals and the Sendai Framework for Disaster Risk Reduction are intrinsically linked. Action in one area benefits the others, and pursuing the three together will increase impact and efficiency as well as help transform the lives of people and safeguard our planet.”