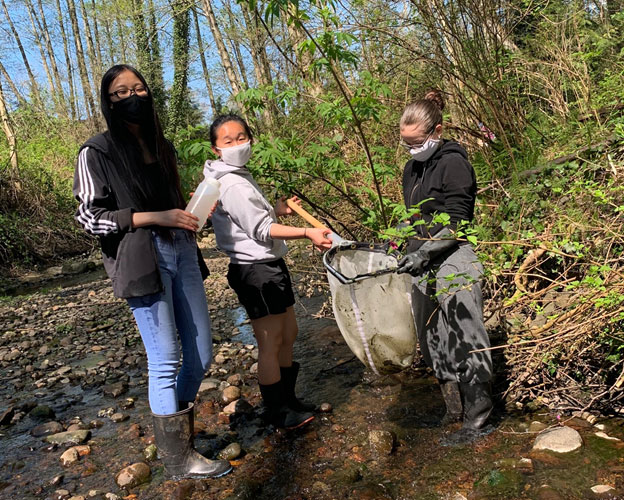 Youth from the Environmental Youth Alliance have been contributing to the ongoing restoration of native habitat along Vancouver and Burnaby’s Still Creek as part of a three year project in partnership with Still Moon Arts Society.

Vancouver once boasted an immense network of streams and creeks; many were salmon-bearing and all provided rich aquatic habitat. However, as the city developed and expanded, these streams were one by one filled in or diverted to pipes, resulting in a massive reduction in freshwater habitat in the city (Proctor, 1989; City of Vancouver, 2002; Vancouver Park Board, 2016; Boyle & Nichol, 2017). Today, only two streams remain open and visible in Vancouver. One of those streams is Still Creek – a 17-kilometre stream running through the urban neighbourhoods of Renfrew-Collingwood in southeast Vancouver and Burnaby

Still Creek is an important freshwater habitat for salmon and other fish, bats, small mammals, and birds, both resident and migratory. It’s also an important part of the Brunette River system and the Fraser Watershed: after flowing through heavily developed Burnaby and Vancouver neighbourhoods, it empties into the Fraser River in New Westminster.

The creek has been impacted by years of toxic storm drain run-off, garbage build up and invasive species. Over 80% of the surface area in the Still Creek Watershed is impermeable, and much of the 11% of permeable surface area is lawns, which do not effectively provide interception and filtration of rainwater.

Thankfully there’s a long history of community-led restoration work to clear up the creek. Carmen Rosen, founding Artistic Director of Still Moon Arts, joined the effort in 2000 and added art projects and community celebrations to the stewardship activities. This work resulted in salmon returning in 2012 for the first time in 80 years! However, there is still much work to be done.

EYA youth have been making regular visits to the creek to learn about the impact of urbanization on biodiversity in aquatic and riparian ecosystems, and lend their skills and hard work to the restoration efforts.

Youth learned to identify and remove invasive species such as Himalayan blackberry and English Ivy, and learn how these plants can also be utilized as a weaving material.

In their place they planted layers of native vegetation – such as willow, hardhack, serviceberry, bleeding heart, goldenrod, and pearly everlasting – these will help stabilize the banks, improve filtration and provide habitat for wildlife.

As plantings and clean-ups continue, youth performed field work techniques to measure pollutants in the waterways by looking at the invertebrates and other species inhabiting the stream.

In addition to supporting wildlife, there are many plant relations that grow well in moist creekside environments, and make Still Creek a unique ecosystem in Vancouver and Burnaby. Sḵwx̱wú7mesh (Squamish) Knowledge Keeper, Matthew Williams shared teachings about cedar, devil’s club, salmonberry, skunk cabbage, and red elderberry – all of whom can be found growing around Still Creek.