In a Global First, Shenzhen Steers Toward 100% Electric Bus Fleet 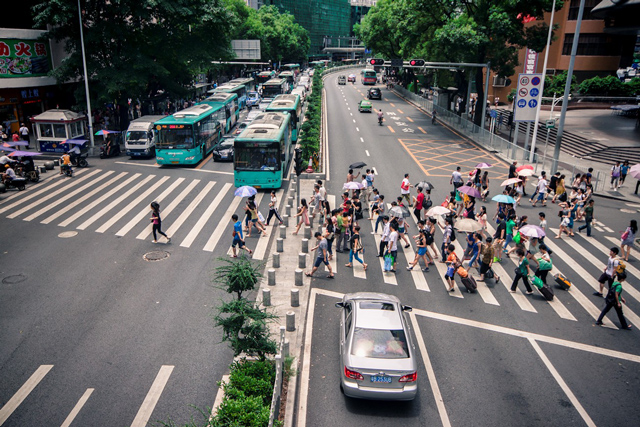 From a small collection of fishing villages 40 years ago to a metropolis on track for a global milestone, Shenzhen has come further, faster than most cities. Already home to the largest fleet of electric buses in the world – roughly 14,500 at the end of May – the city is expected to electrify 100 percent of its public transit bus fleet by the end of 2017. If successful, it will become the first in the world to do so.

Members of the global WRI Ross Center vehicle efficiency team, facilitated by WRI China, recently visited the Shenzhen Bus Group, one of Shenzhen’s three major bus operators with around electric 5,700 buses, to learn about their experience transitioning from diesel and adapting to new technologies.

Drivers waiting for buses to charge. Photo by Xiangyi Li.

Despite its promise, many city bus operators around the world have run into barriers adopting and operating electric buses. There is often concern about high capital costs, uncertainty about battery performance, and a lack of incentives from local and national governments.

Shenzhen began adopting electric buses in 2009, under a national electric vehicle demonstration program that challenged 10 cities across China to deploy at least 1,000 electric vehicles each year for three years. Since then, the city has released multiple policies and targets supporting the industry and brought more electric buses into its own fleet.

To alleviate high capital costs and other potential risks, Shenzhen adopted several different business models. The city experimented with different leasing mechanisms for vehicles and batteries to avoid long-term lock-in, and it distributed operational risks among stakeholders – between bus operators, bus manufacturers, utility companies and other service providers. For example, electric bus manufacturers are currently responsible for maintaining batteries and scrapping old diesel buses, as opposed to the operators.

Aside from financial risks, battery range and charging issues are common concerns. Sometimes batteries don’t support a full route per charge, which reduces operational efficiency and increases costs. Shenzhen Bus Group’s solution was charging between driver shifts, which usually take 30 minutes, and charging overnight at depots, which usually takes around two hours. Also, if there are charging facilities at the initial and final stops of certain routes, managers told us no additional charging time is needed to maintain regular service.

To further improve efficiency, Shenzhen Bus Group developed an “octopus” charging station that can connect to four buses at a time. Though the model doesn’t support simultaneous charging, the buses don’t need to maneuver around the charger, saving time and reducing the need for additional charging stations.

The Shenzhen Bus Group depot we visited can house around 20 buses at the same time. They are parked underneath overhangs equipped with solar panels and shared charging facilities. While the solar panels provide electricity to power depot lighting, there isn’t actually enough capacity to recharge buses, a goal that will require more innovation. In Marrakech, a GEF and UNDP supported one-megawatt solar farm contributes to charging a small number of vehicles in the city’s bus rapid transit fleet, but the amount of solar panels needed per bus makes scaling difficult currently.

Shenzhen Bus Group also operates electric taxis and other commercial vehicles, as part of the city’s plan to improve air quality. These projects provide additional lines of revenue, enabling the company to expand and enhance its electric fleet.

Beyond reducing air pollution, Shenzhen’s buses are a crucial part of the city’s – and the nation’s – efforts to reduce carbon emissions. China’s Nationally Determined Contributions to the Paris Agreement prioritize public transport and encourage the development and adoption of new energy vehicles. The public transit buses in Shenzhen account for only 0.5 percent of the city’s vehicle stock, but , according to the Transport Commission of Shenzhen Municipality.
Despite the fact that coal power plants still account for 66 percent of electricity generation in China, local researchers estimate Shenzhen’s electric buses can reduce 48 percent of CO2 emissions, compared to diesel buses, and up to 100 percent of other local pollutants. Gains could be even greater with a different energy mix.

In addition to environmental benefits, the Shenzhen Bus Group reported financial benefits, including fuel cost savings, less maintenance, and reduced or no overhaul. Operators said they expected labor costs to increase due to the uncertainties of the technology and unexpected breakdowns, but these costs have yet to materialize. One electric bus can replace 0.95 diesel buses, according to their estimates, with operating savings compensating for higher initial capital and financial costs.

The WRI Ross Center vehicle efficiency team and our hosts at the Shenzhen Bus Group. Photo by Lu Lu.

Shenzhen’s experience is a model for others. The city managed to innovate in procurement, operation and maintenance, all framed inside broader national and local policies and targets. It’s a powerful example of diverse urban stakeholders accelerating the adoption of cleaner technologies in the transport sector.

Shenzhen is likely to be the first city to pass the 100 percent electrification milestone – but it won’t be the last.

We would like to especially thank the WRI China team for their efforts arranging this visit.