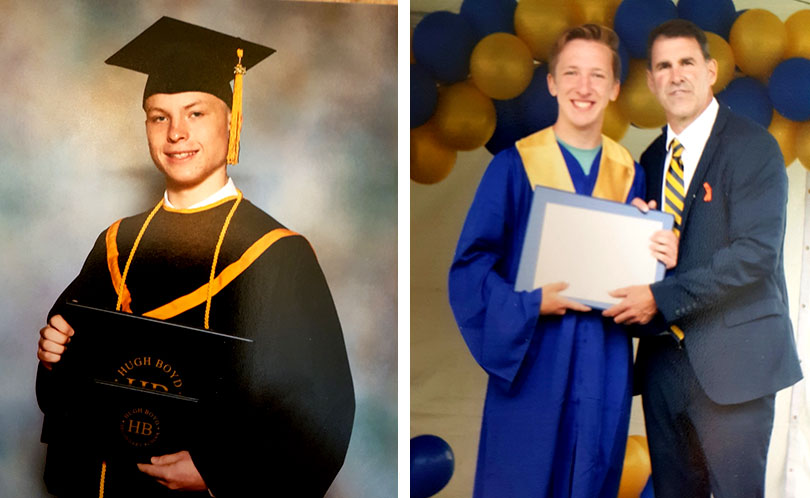 In the spring of this year GTEC delivered an online program for youth called GenZ Goes Electric. The goals of the program were to inform young people about the electrification of transportation and make it more likely they will become EV owners and drivers. All of this based on the conviction that the electrification of transportation in BC plays a significant role in reducing carbon emissions.

GenZ Goes Electric was delivered by an application GTEC developed in conjunction with Lunge.ai and took place in partnership with two BC high schools, Hugh Boyd Secondary in Richmond and Kalamalka Secondary in Vernon. GenZ’s design involved having a youth consultant at each high school who were rewarded with GenZ scholarships of $1000 each.

The pictures you see above are of our two youth consultants, Justin Brower from Hugh Boyd and Gavin Phillips from Kalamalka receiving their GenZ awards at graduation. An earlier blog documented the beautiful work they did as a part of this educational program – https://www.gteccanada.ca/generation-z-goes-electric/

Here is what Justin had to say about the impact of participating in the GenZ program:

I would personally like to thank GTEC for giving me the opportunity to be the youth consultant on the GenZ Goes Electric Project. I learned a great deal about electric vehicles and I am more likely to purchase an electric vehicle now. Electric vehicles are the future of transportation and I am happy I was able to help educate some of my peers. Never before have I been so passionate towards solving one of the world’s biggest problems.

Both high schools thanked GTEC for its support of their students. We believe that informed, passionate and constructive young people are the future of responding effectively to the climate crisis.