A Tiny Self-Sufficient House Aims to Make Us Rethink Sustainability 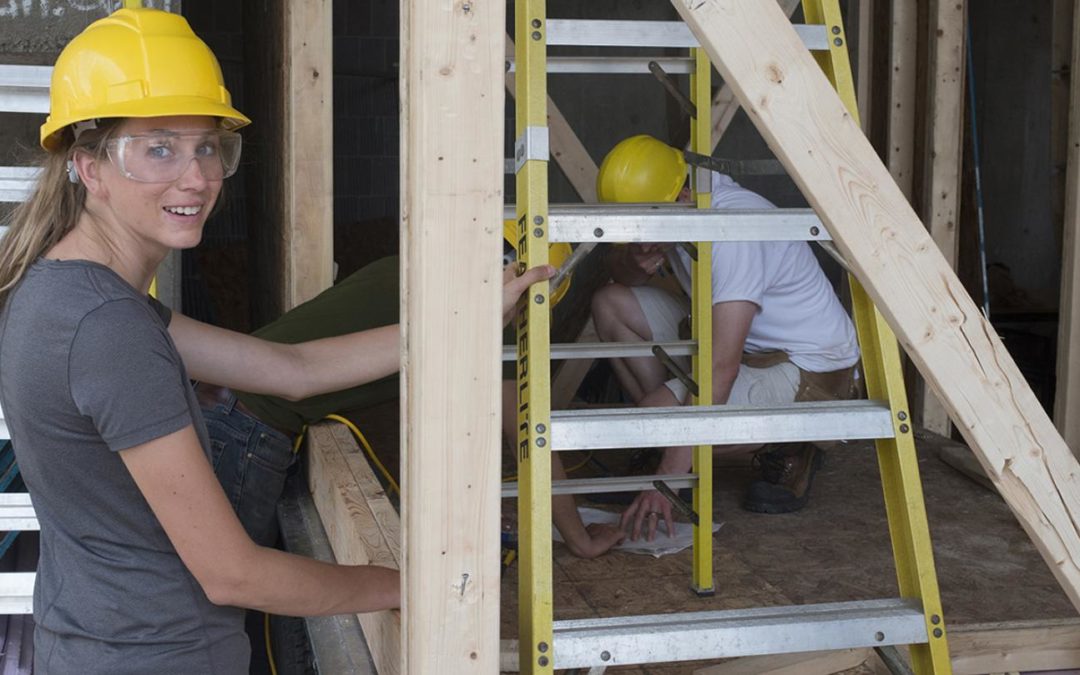 A group of architects and engineers in Ottawa are building a tiny, totally self-sufficient house that people might actually want to live in.

In a small alcove at the rear of the Architecture Building at Carleton University in Ottawa, the future of zero-energy housing is taking shape. When I come to visit, on a searing-hot August day, it doesn’t look like much—a wooden frame fitted with vertebrae-like slats up the sides. But when it’s complete, in mid-September, this micro-house, measuring just over 200 square feet, will contain the latest technologies in sustainable living.

The tiny house, which is designed to generate all its own electricity, heating, and cooling via solar panels and myriad other state-of-the art technologies, will be hitched up to a trailer and carted around Ontario to demonstrate its off-grid self-sufficiency. It’s part of the Northern Nomad project, an idea hatched by Carleton professor Scott Bucking, to get us to re-imagine what it means to be energy-conscious.

“The first thing you say when you walk in the door, is: ‘Yeah, I want to live here,’ not: ‘I could get used to this lifestyle,'” said Ben Hayward, an architecture graduate who is coordinating the project. “I want to make sure the space feels quite large. Everything you’d expect in a bachelor apartment is in this thing.”

Hayward said the goal is to compete with a regular city apartment in terms of comfort and amenities. On that score, his team is doing well: The tiny home is packed with features that make me groan with jealousy. The loft bed, a bugbear feature that often defines small spaces, has been completely redesigned. It’s fitted with casters that allow it to be slid out of the way so the occupants can reconfigure the space as required. A full-sized dining table that can seat eight occupies the centre of the home. Graduate student Ben Hayward is working on a second tiny house that will feature the round window shown in the photos.

The house gets thicker as it gets taller, packed with insulation at the top that keeps rising hot air trapped inside. That heat will come from ultra-efficient solar panels that will cover the roof, which will charge a series of lithium-ion battery cells concealed in a hump in the floor.

Tubes that carry a liquid coolant run throughout the walls and floor of the structure, capable of removing excess heat in the summertime. All the technology packed into the tiny structure will be constantly analyzed by a smart home-monitoring system that will allow a future resident to activate lights or lock the door with a tap of their fingers on an app. Bucking’s tiny house will contain around 100 sensor points, monitoring everything from ambient temperature to relative humidity to motion detection.

“Tiny homes are very divisive,” Bucking said, reflecting on the goals of his project. “People either love them or they don’t.” He said the point of the Northern Nomad project is not to transition city dwellers into miniscule spaces by the thousands; rather it’s to engender a change in how we think about energy efficiency. “I don’t believe that the future for a moment is lots of tiny homes,” he said. “I think it’s the ideas, the concepts, the study of these homes and how they work that’s going to translate well.”

The idea started as a fourth-year engineering project but quickly took on a life of its own as students from other disciplines, including computer science and electrical engineering, joined up to offer their youthful enthusiasm and budding expertise. They raised funds from a variety of sources. The Borealis Foundation, a charity, donated a large chunk; the rest came from other places, including the construction industry and crowdfunding. Bucking is deliberately vague about the total sum it will take to build his tiny house: He’ll only reveal that it will cost about one-tenth as much to construct as the price of an average new-build in Ottawa.

As climate change becomes more of a threat, building homes that use vastly less energy “is not a technical problem, it’s a social and educational problem,” he said. Innovation in the construction industry is often leagues behind what is found in other sectors of the economy. “There’s an attitude of ‘what we’ve got is good enough,'” he said. “It’s hard to bring people back to re-evaluate how they build things.”

Once their tiny home is complete sometime in the fall, Bucking and his students will put it to the real test: People will actually live in the structure to see how well it fares through the harsh Ontario winter. Once it’s been around the block a few times—and has been used as a recruiting tool for Carleton—the goal is to donate it to an organization in need of sustainable housing, like a Northern community or a women’s shelter. Northern Nomad’s final resting place underscores the inequality generated by a lack of efficiency in how we plan our daily lives as North Americans. This tiny house could bequeath big ideas about the importance of sustainability in building an equitable and just society.