Climate Strike in Vancouver, BC 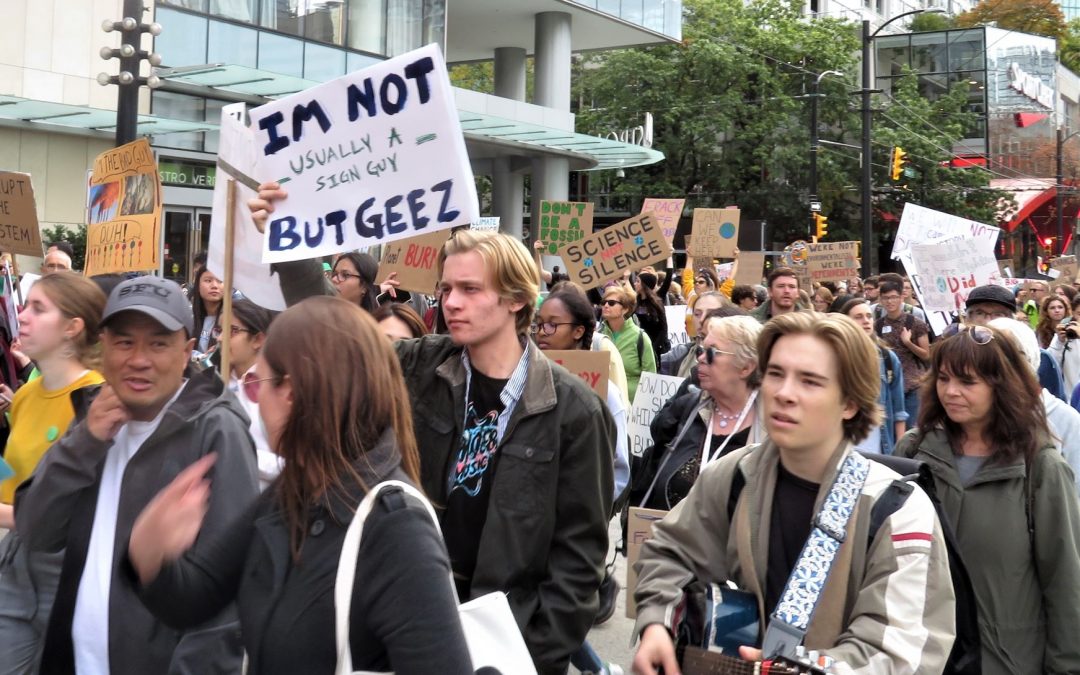 It was about one o’clock on a bright, sunny afternoon. I wasn’t sure what to expect as my wife, Carola, and I set out for the Climate Strike in Vancouver.

Our bus was clogged in traffic and was being redirected from its usual route on West Broadway. Several young passengers had placards on their laps while others were busy creating colourful messages on cardboard.

I knew in the preceding hours that similar marches had already attracted millions in more than 150 countries around the world. This would be the conclusion of week-long environmental activities, inspired by 16-year-old Swedish activist Greta Thunberg. It was also the week that a United Nations Intergovernmental Panel would report that oceans are warming faster than predicted and could rise up to 1.1 metres or more by 2100.

Arriving at the south end of the Cambie Bridge, we were met by a wall of enthusiastic youth. As I learned later, the speeches at City Hall had been cut short. The organizers who made the decision represented environmental youth groups including Sustainabiliteens Vancouver, a body that organizes strikes from school one Friday per month.

The mass of people had begun moving forward to its downtown destination. We slipped into the densely-packed crowd of young and old, parents with young children in tow, workers who were given the day off by businesses that supported the event. The focus was clear, the spirit strong and unified.

Thousands of students were there with the permission of their parents and the school board. My grandson related the story of a friend who was spotted in the march by his Social Studies teacher. The teacher told the student, “Aren’t you supposed to be in class?” To which the student replied, “Aren’t you supposed to be teaching me?” The march will no doubt be a teaching opportunity in schools everywhere in the days ahead.

Teenage climate change activists carried signs mocking government inaction and issuing challenges to what they saw as the status quo: “If you don’t act like adults we will.” The sea level is rising and so are we.” The world is changing but why aren’t we?” “I’m studying for a future that’s being destroyed.” Climate crisis won’t wait, neither will we!”

As we moved forward through downtown streets, onlookers cheered their support. Chanting voices echoed against glass towers on either side. “What do we want?” “Climate justice!” When do want it?” “Now!” The moment was powerful!

As the demonstration slowed, we moved to the front of the line at West Georgia and Hamilton, the gathering place for the final rally. Audio equipment still had to be set up so we decided to detour south. We turned a corner blocks away and were surprised to see the march still winding its way through downtown streets. I looked south to the Cambie Bridge. All I could see was a mass of people coming from the direction of City Hall.

City Police would later say the crowd numbered more than 100,000. It was one of the largest if not the largest demonstration in the city’s history. No reported incidents by police. Peaceful, committed to a common cause. An amazing achievement by today’s youth!