Where Are Canada’s Missing Electric Cars? 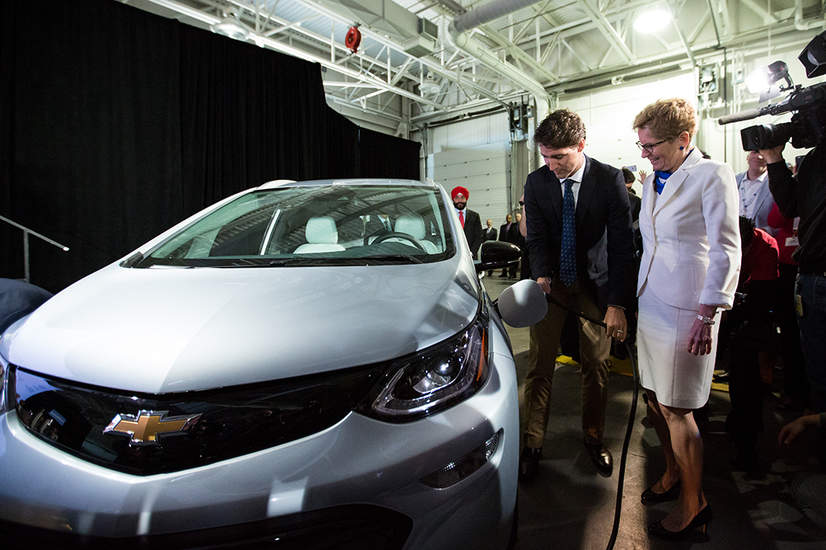 The race is on for electric vehicle supremacy.

Last week, China — the world’s second-largest economy and consumer of about one-third of new cars — announced it will set a deadline for automakers to end sales of fossil-fuel-powered vehicles, in a move that is expected to accelerate the global push into the electric car market.

China joins Norway, France and the U.K. in announcing plans to phase out vehicles with internal combustion engines.

Goldman Sachs recently estimated that electric vehicles will make up 32 per cent of global auto sales by 2040.

So, as the world moves toward the rapid adoption of electric vehicles, where is Canada in all of this?

Suzanne Goldberg, director of research and outreach of the Sustainable Transportation Action Research Team at Simon Fraser University, told DeSmog Canada that recent surveys suggest that between 20 to 30 per cent of Canadian consumers are interested in purchasing an electric vehicle — yet only one per cent of new vehicle sales are electric.

Even though Canadians are interested in making the switch to less polluting modes of transportation, they don’t have anywhere near the access to or selection of electric vehicles available to neighbours south of the border.

“The reason for that difference is because there are still barriers that exist and are very real,” Goldberg said.

Those barriers include an absence of mandatory production targets, rebates, awareness campaigns and a country-wide network of charging stations.

Canada is falling behind in electric vehicle sales at least in part due to a lack of any federal “zero-emission vehicle” policies, leaving responsibility to the provinces. This means no federally issued rebates or supply-side policies aimed at making the electric vehicle market more efficient.

Canadian auto manufacturing associations have indicated significant opposition to a zero-emissions vehicle mandate, which would set a target for the number of electric vehicles government would like to see on the road.

In June, the chief economist for the Canadian Automobile Dealers Association told the National Observer that “we’re very strongly against that.”

While the federal lobbying registry doesn’t indicate specific discussion points for each communication, it’s clear the subject is on the mind of many auto manufacturers. For instance, Ford lists “participation in working groups (ZEV strategy) administered by various ministries” as one of the subjects that it’s currently lobbying the government on.

“We’re concerned that without supply-side policies, consumers may be interested in buying electric vehicles but they may not be able to do so because there won’t be any cars here in Canada,” said Keith Brooks, program director at Environmental Defence, in an interview with DeSmog Canada.

Brooks said that the lack of policy has resulted in electric vehicles like Teslas and Chevrolet Volts being back ordered for many months, and an overall lack of choices including models and colours for consumers.

As with many environmental policies, California is considered the major trailblazer when it comes to rapidly getting electric vehicles to consumers.

The state’s cornerstone policy requires auto manufacturers to produce a certain number of electric vehicles to be allowed to produce gasoline-powered vehicles. It’s a fairly complex credit-based system similar in nature to emissions trading, in which auto manufacturers are allocated a certain number of credits for electric vehicles based on the type and range of vehicle.

Excess credits can be sold or banked for a following year. As a result of exclusively producing electric vehicles, Tesla has been able to sell more than $600 million in credits to other auto manufacturers.

Other Policies Include Subsidies, Tax Exemptions

Aside from requiring auto makers to sell a certain percentage of zero-emissions vehicles, there  are other significant policies that would ease the adoption of electric vehicles as well.

Goldberg noted that supply-side policies are only one of four main barriers, with the other three being price, access to charging at home and overall awareness of electric car options and policies.

In addition, electric vehicle owners don’t have to pay road tolls, can drive in bus lanes and receive free charging from any of the country’s extensive charging network. California is currently looking at increasing its electric vehicle rebate program by a massive $3 billion, something which could help significantly boost sales.

Volvo is one of the lone exceptions to this, with the company recently announcing it will phase out vehicles powered solely by an internal combustion engine by 2019, with all later models being either full electric vehicles and plug-in hybrids. The company is owned by Chinese automaker Geely, leading some to speculate that the move was made to prepare for the massive transition taking place in China.