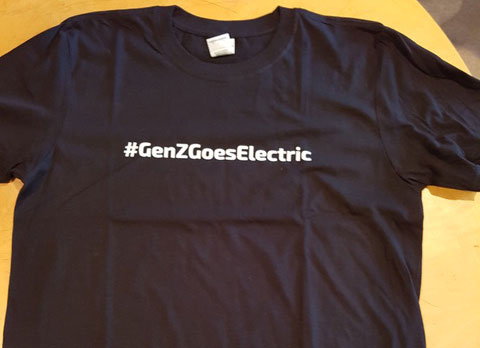 By Justin B
The GenZ Electric Vehicle Education Project
#GenZGoesElectric

In partnership with the Fraser Basin Council’s, Emotive, BC team and the Vancouver Electric Vehicle Association, GTEC is currently delivering an Electric Vehicle Education program via GTEC’s web based application to students at two BC high schools.

The program is built around weekly challenges. This week’s challenge requires students to come up with a ‘pitch’ that invites peers to consider electric vehicles as a transportation option.

Justin B’s pitch was so articulate, well informed about electric vehicles and impassioned about the climate crisis we wanted to share it with you.

I am here today, to show you the route we must take if we want our home to survive.

As most of you know the world is facing a climate crisis but we find ourselves asking what can we really do about it? One of the answers is purchasing an electric vehicle. Now you may be wondering why I am qualified to be giving you this information. Well I am the youth consultant at a non-profit called GTEC, which is doing an electric vehicle awareness program. Also I am someone who happens to live on earth and I don’t really want it to get destroyed.

So why should you purchase an electric vehicle? The most obvious reason is that they produce much less carbon emissions, but there are many others. First off electric vehicles save you money. In BC you can get up to $8000 dollars of in government rebates. Also it is much cheaper to run an EV. For example most electric vehicles use about 15 Kilo-watt-hours of electricity for 100km of travel. In British Columbia our electric prices are about 12.4 cents per kwh. So for 100km of range it costs $1.86. Whereas a Honda Civic would cost about $8.19 for that same range, in gas prices. That means you save close to $1000 dollars in gas money each year. Remember the Honda Civic is considered a fuel efficient car.

People may have misconceptions about electric vehicles being slow city cars but that is simply not true. Electric vehicles accelerate like a cheetah. For example the Tesla Model S’s 0-60 mph time is on average 2.95 seconds. The time it takes for a BMW M3 to do 0-60 is on average 1.15 seconds slower. Also electric vehicles are as maneuverable as a gazelle. This is because the centre of gravity is much lower and the weight is evenly distributed. Most of the weight is in the battery packs, which are evenly distributed in the floor.

There are some practical reasons as well. One is that there is generally more leg room as the doesn’t have a driveline going down the centre of the vehicle. Also since there is no engine or transmission there is often space for a second luggage compartment in the front of the car.

Another misconception is that electric vehicles have a very short range, but that is untrue. The 2020 Chevy Bolt has a range of around 417 km when fully charged. Also there are charging stations everywhere including fast charge stations. Not to mention, but you can charge your vehicle at home and at many workplaces, so you will never have to make an unplanned trip to the gas station.

Our world is changing, and because of the climate crisis your lives will change as well. Climate change is going to bring more floods. That is not good for us as we live in Richmond which is below sea level. Do you want to see endless heat waves in the summer? Do you want to have to pay an arm and a leg for food? Do you want to see millions of people moved from their homes because the sea levels are rising? If you purchase an electric vehicle that moves us one step in the right direction. Also if you buy an EV and those things do happen you can blame your neighbour who drives a hummer.

To conclude this speech I want to recap just how many reasons there are to buy an Electric vehicle. There is the fact that it saves money, there are government incentives, the cars are more reliable, they are more efficient, EV’s have great acceleration, they handle very well, there is more leg room, there is a second luggage compartment, there are lots of charging stations. Also, you are making a conscious effort not to kill the planet? I hope all of you take something away from this speech and think about purchasing an electric vehicle