Preparing Organizations for the Impacts of the Climate Crisis 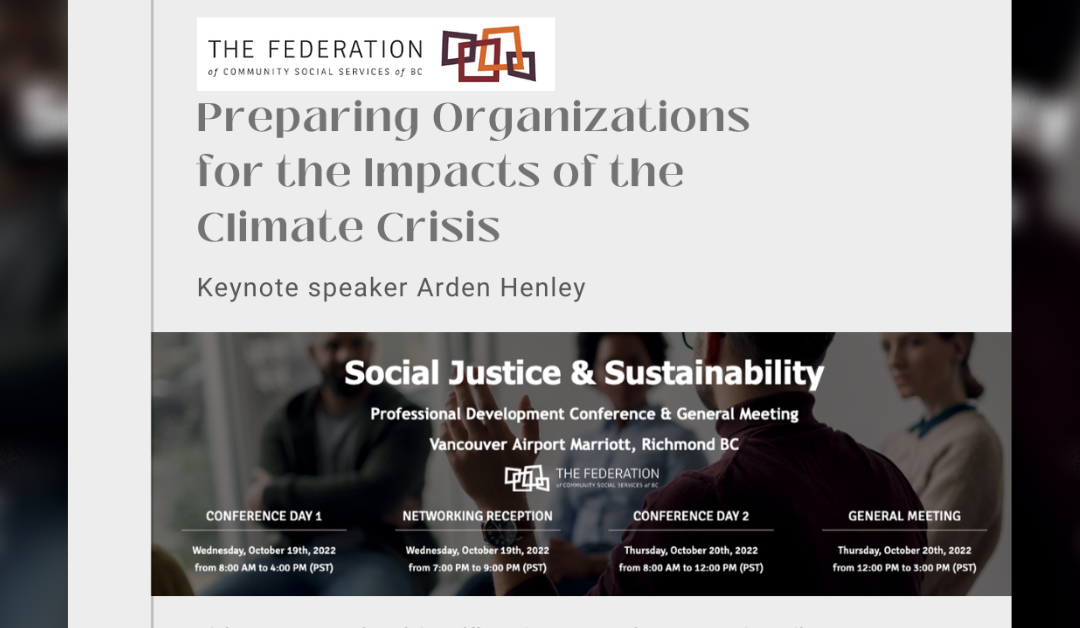 This excerpt is based on a keynote given by Arden Henley at the annual professional development conference of the Federation of Community Social Services of BC, October 19, 2022

Organizations will be profoundly affected by the climate crisis, especially, community social services organizations. In the keynote I addressed this issue via the following three recommendations:

At the outset, I asked the question: why is it so difficult for us to accept the reality of the climate crisis? Borrowing a Comment by the Editor of the GTEC Reader in a recent issue I talked about the climate crisis as the gorilla in the room.

The phenomenon of selective attention was demonstrated in 1999 by two professors at Harvard University, who performed an experiment in which three people in white shirts tossed a ball to each other. At the same time, three other people in black shirts did the same thing. This action was all filmed and shown to a group of students who were asked to watch the film and simultaneously to count the number of times the people in the white shirts passed the ball back and forth to each other.

We are often so busy with the many demands that organization life places on us that we simply don’t notice that this crisis is happening. It is not we dispute that there is such a thing as the climate crisis, but we often overlook its relevance to our lives and the work we do. There are other factors including the fact that the climate crisis is episodic; it is not happening all the time. We have a heat dome and it passes. We have days of poor air quality and an offshore breeze comes along and blows it away. But, in the end, the important point is that climate change IS happening and we will all be impacted.

What is the science saying about climate change? In brief, since industrialization human fossil fuel burning activity has pushed the average temperature on the planet up 1.1 degrees Celsius and, at the present level of intervention, we are on the path to over 3 degrees Celsius. The generally accepted level of irreversible damage to multiple planetary systems is 1.5 to 2 degrees Celsius. To achieve 1.5ºC, we need to reduce emissions by 45% below 2010 levels by 2030 and reach net zero emissions by 2050.

Canada is warming faster than the global average, as well as contributing disproportionately on a per capita basis. What this means is more extreme and intense weather events such as heat domes, atmospheric rain, fires and flooding etc.

What is also overlooked is the impacts that all of this will surely have on the psychological, social and cultural worlds. For example, a recent study, published in the widely respected British medical journal, Lancet reflected the following climate crisis impacts on young people:

The most recent IPCC report also cites the growing impacts of the climate crisis on mental health. There is widespread distress, especially among younger members of the population who, understandably, feel their futures are in jeopardy. Their distress does not relate to facing changing climate conditions in and of themselves, but to the existential threat posed by these changes should humanity fail to respond. The latest research suggests that distress among young people is tied directly to the perception that society’s response, thus far, is incremental and insufficient.

Scientists the world over have repeatedly warned of the outcomes of climate change. We know that a major change in our social and economic worlds is in the cards…..but not yet. The ‘not yet’ and its expiry date are always important questions in relation to change.

The COVID-19 crisis has shown us a microcosm of how ‘not yet’ works. By early January 2020 COVID-19 was in full swing in Wuhan, but it was far away. Scientists and government intelligence agencies rang the alarm, but society after society in the developed world hesitated when action could have saved lives and prevented more dire economic consequences.

On March 9, the day before Italy locked down, President Macron strolled the Champs Elysees with his wife touting the vibrancy of the French economy.

We had to wait, to see it, to taste it, to hear the sirens blare and witness a loss of lives. And then we acted, some countries more boldly and definitively than others and with very different results.

We are deeply attached to set of values and an economic system that has conferred tremendous material benefits while, at the same time, making us increasingly insensitive to one another and to those less fortunate, less privileged and less endowed, not to speak of the natural world. We tell ourselves that our good fortune reflects our virtue, our cleverness and the fruit of our efforts. A culture of individualistic values invites a trance like state of self-interest, incessant activity and the avid pursuit of endless growth.

The extent to which this trance is socially and economically induced is reflected in what happens when a catastrophe such as COVD-19 breaks the spell and dials down the ‘economy’. Suddenly, there we are. We find one another. Outbreaks of love and compassion occur everywhere. Musicians serenade their neighbourhoods from balconies and fathers play with their children in the park. When we were locked down, prevented from our usual rounds of intense activity, the porpoises returned to the canals of Venice. And when we accepted that a pandemic was happening vaccinations were developed at unprecedented speeds.

In a fascinating research project game designer and futurist, Jane McGonigal teaches us a lot about how we can prepare for the wide range of environmental, social and political impacts that are on the way.

This research involved a 2008 project during which McGonigal and her team engaged thousands of participants in predicting the future in terms of a number of possible scenarios, including a respiratory virus that became a pandemic. Research was guided by a series of questions that ranged from exploring how the participants anticipated feeling during a pandemic to predictions about how society would respond. The target year was 2019 and, it turns out, the predictions were remarkably accurate.

The predictions, it is important to note, were not generated by algorithms, but simply by asking questions and collecting and analyzing the results. But the accuracy of these predictions was actually not the most significant finding. When the actual pandemic took hold during 2020 participant after participant in the original study contacted McGonigal to report how well they were doing in every area from health and well-being to business. They were prepared and being prepared made them adaptable. We need to accept that the climate crisis is happening and we need to accept it actively. By actively accepting I mean accept it in a way that mobilizes us.

What are some of the likely scenarios for us? A flood plain map for Vancouver over the next 20-30 years shows vast areas that are likely to experience severe flooding because of rising sea levels and, what are called, king tides. Richmond is likely to experience extensive flooding, for example.

Here are some probable scenarios over the next 3-5 years:

GTEC is busy developing a service called Reimagining Organization Futures that will assist organizations through a thorough-going planning process based on applying evidence-based solutions to scenarios specific to the organization and coaching the development of climate crisis related communities of care. A version called Reimagining Community Futures will also soon be available.

The keynote concluded by identifying steps that can be taken at all three levels of organization life, boards, staff and clients and by emphasizing the role that federations such as the Federation of Community Social Services can play.