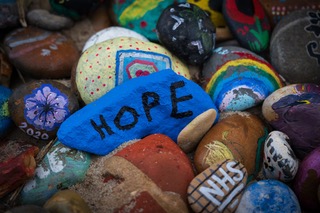 After five months of steady increases in new coronavirus cases and deaths across the planet, both curves have begun to bend downward in February. The world’s increment during the shortest month has been 12.5 million infections and 300,000 fatalities. This is a substantial reduction from January in both categories.

The global death toll from COVID-19 passed 2.5 million on February 24th. Worldwide, the case fatality rate (CFR) is 2%. However Mexico’s CFR is a shocking 9% — perhaps inflated by its minuscule 5% testing total. Belgium, Britain, Germany, Italy and South Africa are in the 3% CFR zone, while farther down the mortality table Iran, Peru, Hungary, Bulgaria and Bosnia have lost about four lives for every hundred infected. Canada’s CFR is around 2.5% and the USA’s is 1.8%.

The United States continues to record one-quarter of the world’s COVID cases and one-fifth of the fatalities. But almost 10% of Americans are now fully immunized (two doses) and the pace of vaccination in the US is nearing two million per day as distribution improves. The FDA’s recent approval of the Johnson & Johnson single-shot vaccine should help too.

Despite the recent decline, the IHME is projecting another 1.15 million global deaths from the pandemic by June 1. That would be commensurate with the February average of just under 11,000 daily obituaries. Brazil is expected to lead the way with 1200 COVID fatalities per day for the next three months, matching its recent volume. Will the United States recede to 600 a day, one-quarter of its February average? That estimate seems a bit sanguine, given the penetration of several variant strains of the virus into many states. But more than half of the US population should be vaccinated by June, so we’ll see.

Canada has just authorized the AstraZeneca vaccine, which, together with increasing deliveries of the Pfizer and Moderna products, buttresses the IHME prediction of only 25 daily Canadian losses of life due to the pandemic in the next three months.