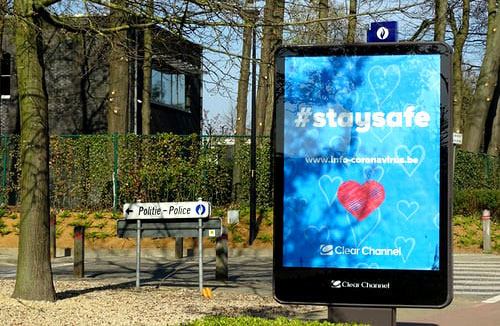 The COVID-19 virus continues its relentless march around the globe, with total cases consistently increasing daily by around 80,000 and deaths by several thousand per day. About 27% of the 2.7 million positives have now recovered.

The situation remains grim in most of Western Europe: Italy, Spain, France and the UK are still on a high plateau, registering thousands of new cases and several hundred deceased every day. Belgium now has the highest case fatality rate (15%) and the highest ratio of deaths per million population (560) of any country in the world. Sweden is suffering a third upward bounce in its deaths curve (now 12% of cases) in the wake of its questionable “soft” distancing policy. But good-news stories have been authored by Germany and Austria, with low fatalities (3%) and two-thirds of their infections having recovered. They are now cautiously reopening their economies.

Eastern Europe is emerging as a new beachfront for the virus. Russia has been adding 4000 or more new cases daily for the past week, and now Belarus and Ukraine are surging. The Arabian Peninsula has also spiked: 1100 cases a day in Saudi Arabia, 500+ in Qatar and the UAE. In South America, Peru has jumped by 4000 infections in the past three days, and Brazil is still on a steep upward path.

Singapore was lauded for its early lockdown strategies to successfully limit COVID-19. However this week 1000 or more cases a day have sprung up, largely in Singapore’s crowded migrant-worker dormitories. Japan is also experiencing a rapid climb in new cases after appearing to flatten the curve for several weeks.

It’s a treacherous disease. Nowhere is this more evident than in the USA, which has clearly botched its preparation and its messaging. To date, the US has logged four times as many cases and twice as many deaths as any other country. And America is very much in the middle of its ordeal, perhaps still on the rising side of its coronavirus curve. New York State alone is on track to outdistance every other nation statistically, having lost more than one in a thousand residents already, recording its highest daily death toll of 2800+ on April 21. The rest of the US Northeast is also heavily engaged: New Jersey, Connecticut and Massachusetts are all exceeding 300 fatalities per million. Elsewhere, Michigan and Louisiana are mourning losses at similar levels.

Notwithstanding the urging by American medical experts to continue containment strategies in the face of these deadly data, the Tweeter-in-Chief has exhorted anti-lockdown protesters to “liberate” their states. The Republican governors of Georgia, Florida and Texas have green-lighted a renewal of normal economic activity almost immediately, despite more than 20,000 cases each. This is raising fears of a “second wave” of COVID-19 across the country.

Canada’s curve may be peaking. Quebec and Ontario still have the vast majority of cases and deaths. Outbreaks in care homes and meat-packing plants have inflated the numbers, especially in Alberta. New cases are dropping in B.C. and the less-populous provinces, which may soon be ready to reopen. Daily life will eventually resume as a “new abnormal”.

There is good news from Down Under. Australia and New Zealand have crushed the curve, recording only three deaths per million and showing very few new cases at this point. While benefiting from their isolated island status and relatively small, spread-out populations, both countries have used aggressive testing, contact tracing and physical distancing to minimize the damage.