The wait is over. The battery revolution is here. - GTEC Green Technology Education Centre

The wait is over. The battery revolution is here. 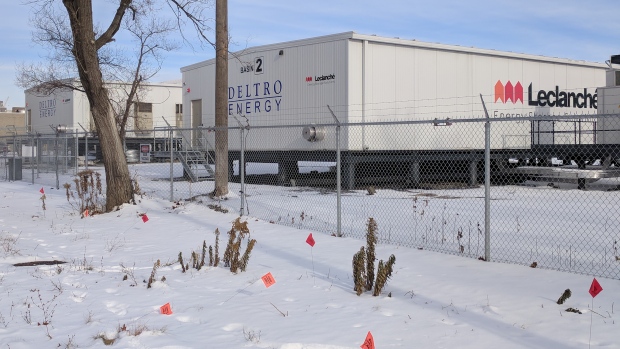 Giant grid-scale lithium-ion batteries in the centre of Toronto will go online this spring — one more sign the battery revolution is underway.

On an industrial site in Toronto’s Port Lands, not far from Google’s planned new urban experiment, are two warehouse-sized boxes on stilts.

Built by the Ontario company Deltro, the structures are actually enormous lithium-ion batteries that, as of spring 2018, will be plugged in to the Canadian electricity grid.

Lithium-ion technology is already indispensable in small portable devices such as phones and tablets, and the economic case for the technology is constantly improving for use in automobiles and for other energy storage purposes, according to Canadian battery pioneer Jeff Dahn.

From his lab at Dalhousie University in Halifax, the award-winning scientist is working to help Tesla improve the quality of its lithium-ion batteries.

A technician works on a lithium-ion battery system that will be used to power the ExoMars rover vehicle during the next ExoMars mission in 2020. (Regis Duvignau/Reuters)

Only a few months ago, Tesla completed a grid-scale battery in Australia to store wind generated power until it’s needed. The project would have been impossible just a few years ago when Dahn was working on his innovations in lithium-ion technology.

For a long time, commentators skeptical of the move toward electric cars and green power have lamented the failure of the industry to invent new technology that would make battery storage economically useful.

Media reports these days are full of examples of the kind of radical innovations that would double or even triple the amount of electricity batteries can save and then discharge — called energy density — thus doubling or tripling the distance a vehicle could travel. All while keeping the size of the batteries the same.

But according to battery scientist Dean MacNeil at Canada’s National Research Council, batteries are good enough and cheap enough now that industrial users are through waiting.

MacNeil, who worked with Dahn back in 2001 when he was doing research for his doctorate, says radical lab-stage technology with new chemistries and new ideas can take a decade to come into popular use.

“They are much harder to introduce into a market, especially a market like electric vehicles where you’re very dependent on hitting specific performance requirements and you’re very risk averse,” he said.

MacNeil, whose Ottawa lab tests existing battery technology, says he expects those radical innovations to hit the market eventually, but so far the great successes have come from gradual innovations in existing lithium technology, where capacity has increased by three times since the batteries came on the market more than a decade ago.

According to the business news service Bloomberg, prices have fallen 24 per cent in the last year.

The Deltro project is a step beyond experiment. When it completes testing and gets connected to the grid this spring, the giant batteries will be responsible for balancing the grid and keeping the power at the North American frequency standard of 60 hertz, preventing brownouts and surges when demand fluctuates.

In the past that balancing act has been accomplished by adjusting output at large hydro dams far from where most power is used. Lower battery costs have now made it possible to move that capability closer to the places where it’s needed.

Deltro Energy chief operating officer Andy Ganapathy says the price and the energy density of the newest lithium-ion batteries helped make the project feasible. If the company had used traditional lead acid batteries instead of lithium, he says, the footprint of the project would have been up to ten times bigger.

“As the developer-owner of energy storage projects, we’re very technology agnostic,” Ganapathy said. “Right now, we chose lithium, but in five years time we might choose something else.”

The price of wind power in Canada has plunged to 3.7 cents per kilowatt hour, with prices even lower in other parts of the world, making cheap battery storage more feasible. (Sandy Huffaker/Associated Press)

With prices falling and technology improving, Ganapathy says Deltro is ready to move on to the next stage of battery storage, sometimes called power shifting. He says Deltro has begun working with large unnamed industrial companies to store power when it is at its cheapest for use when electricity is most costly.

In Alberta this month, the price of wind-generated electricity plunged to 3.7 cents per kilowatt hour. As the price of storage falls further, it will become increasingly economic to scale back on traditional peak generator capacity such as coal or gas plants and store that cheap power until it’s needed.

That’s revolutionary. And the revolution is far from over.

Energy scientist Jeff Dahn says with continuing innovations in batteries, the smart grid, renewable energy and electrified transport, he can’t help being optimistic. He says he can hardly wait for what the future brings.