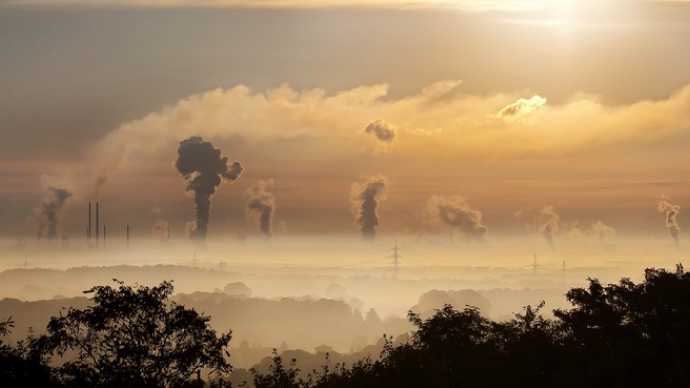 A draft copy of a new U.S. climate report appeared on the web this week, with word that it had been leaked to prevent its suppression by the Trump Administration. Here are five quick facts about this new report.

Firstly, regardless of the numerous headlines proclaiming the original document – released on Monday, August 7 – as a leak, it was not actually leaked.

The report in question, the U.S. Global Change Research Program Climate Science Special Report (CSSR), was produced by scientists from NOAA, NASA and various universities and laboratories from across the United States. This report is intended as a summary of the current science of climate change, as it pertains to the climate conditions and extreme weather events that are being witnessed in the United States. It is part of the process of these agencies and institutions putting together the U.S.’s Fourth National Climate Assessment, which is due out sometime in late 2018. This particular copy of the report was its third draft.

Just like any document of its nature, this draft report was posted by the U.S. Global Change Research Program, from December 15, 2016 to February 3, 2017, on their review web page, so that anyone from the public – layperson or scientist – could download and read it, and submit comments regarding its content.

As of Tuesday, August 8, however, the New York Times released the Climate Science Special Report’s 5th order draft. According to NYT reporter Brad Plumer, this version has not been made public before now and is the version currently at the White House for review. This is the true leaked report.

2) The message is clear

This final draft of the report is quite clear: climate change is definitely being felt around the globe, right now as opposed to some time in the future, human activities are the dominant cause of the observed changes, and according to longer-term records, the observed warming is unprecedented (in magnitude and speed) for the last 1,700 years or more.

According to the report’s key findings:

“We find no convincing evidence that natural variability can account for the amount of global warming observed over the industrial era. For the period extending over the last century, there are no convincing alternative explanations supported by the extent of the observational evidence. Solar output changes and internal variability can only contribute marginally to the observed changes in climate over the last century, and we find no convincing evidence for natural cycles in the observational record that could explain the observed changes in climate.”

“Without major reductions in these emissions, the increase in annual average global temperatures relative to preindustrial times could reach 9 degrees F (5 degrees C) or more by the end of this century.”

“Longer-term climate records over past centuries and millennia indicate that average temperatures in recent decades over much of the world have been much higher, and have risen faster during this time period, than at any time in the past 1,700 years or more, the time period for which the global distribution of surface temperatures can be reconstructed.”

This figure from the final draft report displays the global radiative forcing (the measure of how much a factor can change the balance of incoming and outgoing energy from the planet), for human-caused factors, changes in solar output and volcanic emissions. As shown, volcanic emissions have a small net negative effect, thus cooling the planet, and there is a small positive effect from solar output changes, while human-caused factors are the dominant reason for the current imbalance.

Hopefully these statements, given their confidence levels, will be a wake-up call to those still at odds with the overwhelming scientific evidence for the current trend in climate change, and our role in it.

When asked about whether climate change was the cause of events like Hurricane Katrina, Hurricane Sandy, the Calgary floods, etc, the usual response has been that we can’t attribute individual events to climate change. These days, however, due to observing weather and the effects of climate change in various regions and with regards to various types of weather, scientists are becoming better at seeing the possible contribution of climate change to these kinds of extreme events.

The confidence levels in this part of the report are not as high as it is with general temperature and precipitation trends (mostly “medium” confidence, based on fewer sources, emerging methods of study, developing models, and competing schools of thought), mainly because this science of attribution is still in development.

That said, based on the report, scientists may have identified some trends, for an upward trend in hurricane activity in the North Atlantic since the ’70s, for greater intensity and higher precipitation rates from tropical cyclones, more variability with tornado activity across the United States (fewer tornado days, with more tornadoes per tornado day), earlier snowmelt and decrease in snowstorm frequency towards the southern reaches of traditionally snowy climates, a northward shift of winter storm tracks, and increasing frequency and intensity of “atmospheric rivers” impacting the U.S. West Coast. There is also a noticeable trend towards tropical cyclones reaching their peak strength farther away from the equator, associated with the expansion of the tropics.

Curiously, a recent study mentioned in the report has given a potential clue with regards to the apparent 11-year “drought” in major hurricanes making landfall in the United States. The researchers point to a potential pattern of conditions that can cause a hurricane to strengthen when it is deeper in the tropics, but then weaken as it approaches the United States coastline.

The view of Hurricane Sandy, from the GOES-13 weather satellite, on October 28, 2012. Credit: NASA Earth Observatory

While it’s clear that this 11-year U.S. landfall “drought” is an anomaly, at the same time, the report calls into question the use of “landfall” as any form of metric here, as there have been storms during the past 11 years (Ike in 2008, Irene in 2011, Sandy in 2012 and Matthew in 2016) that have had severe impacts on the United States, even though they had weakened from their “major hurricane” status (category 3 or above) before making landfall. Those impacts, alone, could invalidate the “drought”, simply by pointing out that there have been severe impacts from major hurricanes, prior to their landfall.

As this branch of the science develops further, we will likely see these confidence levels shift, either way, as it becomes more clear exactly how the changing climate influences these different weather phenomena.

4) Suppressed or watered down?

With the 5th draft now leaked to the public, it remains to be seen what the White House will do with the report.

If they suppress it, make sweeping changes to the language of the report, or water down the statements of confidence level and likelihood regarding the current and future impacts contained in the report, the public will now know about it.

That fact may not act as a deterrent, of course.

It’s a matter of public record that government websites, especially the Environmental Protection Agency, have removed references to climate change, yet that did not prevent or reverse the changes that were made.

Even if the White House leaves the report as is, or makes only minor changes, leaving the overall conclusions intact, given the collective stance of the Trump Administration, it is very unlikely that this report will sway their opinions or official positions on climate change.
The sad fact is that they have committed to their current position despite the overwhelming evidence, already widely available, that climate change is real, it is happening right now, and the primary cause of it is the increased concentration of greenhouse gases in the environment, due to the burning of fossil fuels.

Unless they decide that a political reversal on the subject would be to their advantage, it is far more likely that they will simply brush the conclusions of the report aside, and claim that there are higher priorities – security, the economy, or whatever else suits them at the time.
We’ll just have to wait, to see what happens.

In the mean time, you can read the full Final Draft of the U.S. Global Change Research Program Climate Science Special Report here.

Watch Below: What’s Al Gore’s message in An Inconvenient Sequel? There is still HOPE