How the B.C. electric car fantasy will become reality 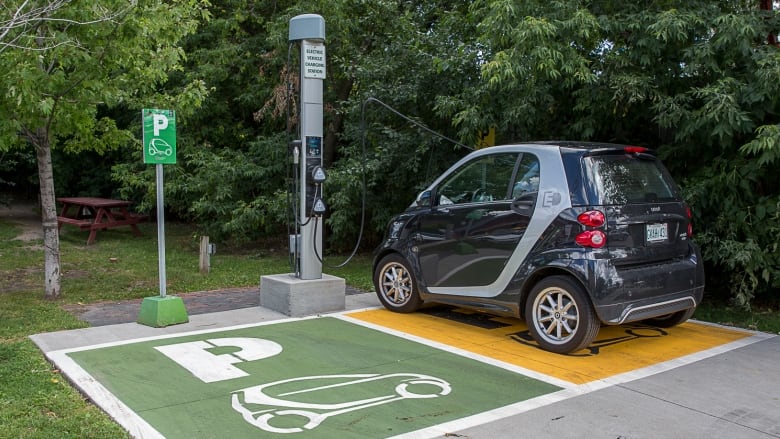 If B.C. is to reach its ambitious GHG goal by 2030, the provincial government will have to find a way to massively increase the supply of electric vehicles for sale.

It’s a long drive from Vancouver to Lake Louise, and you could use a break, a little pick-me-up for you and your car.

Park your electric car on a hot parking spot, the kind with a wireless charging unit built into the pavement. It’s just a bigger version of the cordless pad that charges your phone.

In the time it takes you to have a cup of coffee and a doughnut, you are back on the road with a clear head and a charged battery.

If that sounds futuristic, remember that today’s electric cars are more Fred Flintstone than they are George Jetson. With improved batteries, a decade from now you and your dog Astro will be driving to the Rockies on a single charge.

It is a future the province is keen to encourage, as it grapples with ambitious greenhouse gas emission targets while developing a carbon-intensive liquid natural gas industry.

Only last year, electric car owners were blogging their trips across Canada, driving across the vastness from charging oasis to oasis to prove it could be done.

Trip-planning based on where you can charge will soon be a thing of the past, said Dan Woynillowicz, policy director of Clean Energy Canada.

“If you own a car, it will be electric and whatever kind you want, an SUV, a minivan, a sedan or a sports car,” he said. “By 2030, you’ll have access to the charging you need at your house or condo, and you’ll be able to do it really quickly.”

Some modern version of the gas filling station will offer super-quick charging.

Likewise, lamp standards and parking meters will have charging equipment, and plenty of businesses — your employer, restaurants and shopping malls — will see charging as an amenity they need to offer their employees and customers, he said.

“Your experience will be largely indistinguishable from your experience today with a gas vehicle,” he said. “Cars should have enough range that people won’t even have to charge every night when they get home.”

Any place where there are people, there is electricity, so chargers will just become part of the built environment.

BC Hydro has installed 57 stations that can charge an EV battery to 80 per cent in 30 minutes, and there are plans for 25 more. Another 1,300 chargers have been installed in homes and businesses with incentives from the Clean Energy Vehicle Program (CEV for BC), although that program funding ran out in July.

If B.C. has any hope of meeting its 2030 GHG objectives, it will mean a massive turnover of B.C.’s three million light trucks and cars from gasoline and diesel to electric batteries in just 12 years.

BC Hydro predicts British Columbians will be driving 300,000 electric cars by 2030. But at least three times that many gas-burners will have to come off the road just to offset the emissions from the recently approved LNG Canada plant, according to Clean Energy Canada.

There are 3.7 million light and heavy vehicles in British Columbia, and about 15,000 all-electric vehicles on the road, according to BC Hydro. Another 45,000 plug-in electric-gas hybrids can switch between fuels.

EVs make up 1.5 per cent of the fleet, but that figure is likely to rise.

The New Democrats want to see electrics hit 30 per cent of all sales by 2030. The problem is that electric and hybrids are still hard to find at B.C. dealerships, according to Woynillowicz.

Only 40 per cent of B.C. car dealers have a single electric vehicle on their lot, and most said it would take three months to a year to get one, according to a report released this morning.

EV owner Randy Rinaldo was forced to buy his Fiat 500 in the United States.

“You have customers and a market out there that wants these cars — they want to start saving money, they want to stop polluting — and you don’t supply it,” he said.

Most of the EVs that are being made are flowing to places like California and Quebec, where governments require auto manufacturers to meet lofty emission targets by increasing the supply of electrics.

Most owners save about 75 per cent on fuel and maintenance with electrics, which makes them an attractive option.

The government’s CEVforBC rebate makes the deal even better. The $27-million program has handed out about 6,000 rebates to electric car buyers, most of them for $5,000 and a handful at $2,500.

The industry also funded the SCRAP-IT rebate program, which offers $6,000 to buyers of new electrics when they retire a gas or diesel vehicle. Buyers of used electrics get $3,000.

About 950 people will double down this year, earning both the CEVforBC and the SCRAP-IT rebates, which have a maximum payout of $11,000.

How the B.C. electric car fantasy will become reality