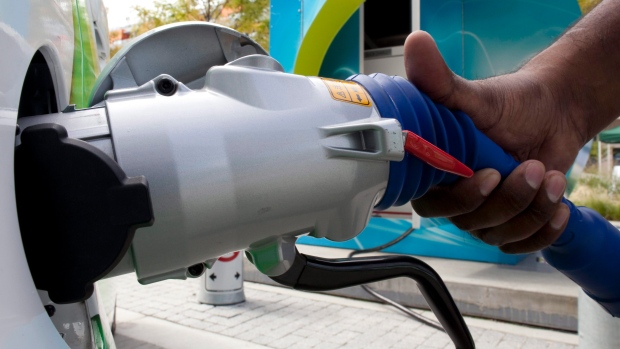 A power cable is attached to an electric vehicle from an electric-vehicle charging station in downtown Vancouver, B.C. Tuesday, Sept. 14, 2010. The car was seen during a media ride and drive set up for 'Electric Vehicle Week' showing the most advanced electric cars now being built by automotive manufacturers. (Jonathan Hayward/Canadian Press)

Starting in January, all parking stalls for residents at new condo developments in Vancouver will have to have the capability to charge electric vehicles.

Council agreed to bump up the requirement from 20 per cent to 100 per cent at Wednesday’s meeting.

“At the moment, with only 20 per cent of stalls being equipped with EV infrastructure, there is no guarantee of access,” said Ian Neville, a climate policy analyst with the city. “Many strata rules are not very flexible about changing parking, especially if it’s assigned to your strata lot.”

Visitor parking stalls will not be required to have charging capability.

It’s already mandatory for the infrastructure to be installed in all new attached or detached single family homes in the city.

Neville says it is much cheaper to install charging capability in new developments than it is to retrofit older buildings.

Urban Development Institute CEO Anne McMullin says she has been discussing this initiative with the city for some time.

She doesn’t anticipate the new rules will have much of an impact on housing affordability, especially in areas that have lots of frequent transit and fewer parking requirements.

“While the technology is still emerging, we do expect the initial estimated implementation costs of $300 per stall could come down,” she said. “These are still early days.”

Mayor Gregor Robertson says now that the new rules are in place, he’d like council to focus on getting more chargers into older buildings.

He says he currently lives in a building where the strata council is struggling with getting retrofits into his parkade.

“I think as a city we’re going to have to figure out — working with the province and strata councils in the city — a way that the retrofitting can advance,” he said.

“We have to make sure that residents across the city can get charging into parkades where it’s currently gummed up.”

The city is also looking to expand its network of public charging stations.